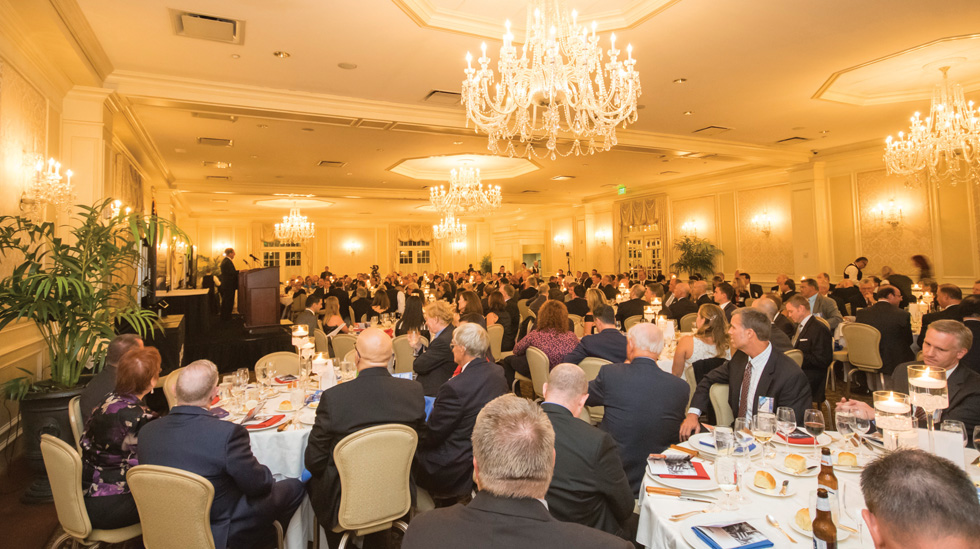 Note: As always, all award winners are directly determined by the results of our Annual Dealer Survey.

This year The Cannata Report awarded seven Frank awards””as determined by the results of our 30th Annual Dealer Survey””and officially announced all winners live at the event as opposed to beforehand for the first time ever. The seven awards included two new categories, “Best Marketing Strategy” and “Best Software Developer.”

We introduced the “Best Marketing Strategy” award for the manufacturing segment this year because, particularly in today’s increasingly cluttered and exponentially evolutionary market, dealers absolutely need to understand the direction of their major manufacturer partner in this vein so they can best leverage in tandem with their own variations or individual marketing strategies.

We introduced the “Best Software Developer” award because dealers now more than ever””as evidenced by our 2015 survey results and what we learned by communicating with and covering dealers this year””are increasingly moving from a commodity- to a solutions-oriented sale and an overall services orientation.

In introducing the “Best Woman Executive” award last year, Frank and I had decided to do that post survey completion so we, as opposed to our audience, selected the inaugural winner, my mother, best friend and business partner, who is responsible for the production of the Annual Awards & Charities Dinner (as well as all of The Cannata Report’s events).

However, this year, we took the award into account when compiling questions for this year’s Annual Dealer Survey and the winner was the first to be determined by our core audience.

We extend out congratulations and best wishes for continued success in the future to all seven winners.

2015 was a record-breaking year in terms of fundraising efforts in conjunction with The Cannata Report Annual Awards and Charities Dinner. The Cannata Report, along with substantial support from MWA Intelligence (MWAi); Nick Valvano, President Emeritus, The V Foundation for Cancer Research (The V Foundation); CDA and personal contributions; raised and pledged $186,415. Of that total, $166,140 will directly benefit the Esophageal Research Grant The Cannata Report initiated in memory of beloved industry veteran Bob Shields (formerly of Copytronics). The remaining $20,275 plus will directly benefit Adopt-a-Soldier Platoon (AaSP).

Cost-of-entry fees and donations from notable industry dealers and other individuals donated and pledged by October 1 yielded $81,000 for the Research Grant. Valvano added $20,000 upon acknowledging receipt of the $81,000 to bring the total over $100,000 on the evening of the event. CDA pledged $10,000 shortly thereafter. As of press time, we received an another $23,400 in post-event cost-of-entry fees and additional donations from dealers, Tim Vellek, SVP, Marketing, Ricoh Americas Corp. (Ricoh)””who donated personally””and Ricoh who donated $5,000 in addition to their $5,000 cost-of-entry fee.

Stramaglio and crew hit the rode on their bikes back on May 15, departing from Stramaglio’s hometown of Scottsdale, Ariz. for Washington, D.C., where the ride culminated on Memorial Day, May 25, 2015. Along the way, the group stopped at the following locations, most of which are dealerships: Muratec in Dallas, Texas, Milner in Atlanta, Ga., Advance Office Systems in Knoxville, Tenn., Cobb Technologies in Richmond, Va., and Memphis Communications in Memphis, Tenn.

Monies raised for AaSP broke down as follows. While The Cannata Report initially only arranged to donate proceeds from the event’s silent auction of American sports memorabilia to AaSP, an urgent need for funds arose a few months prior to the event. The Cannata Report responded to the call by reaching out to subscribers in partnership with U.S. Bank, who agreed to match any dealer contributions for the pre-event effort, regarding more immediate assistance.

Not only that, but three out of those seven who joined us for the first time””Square 9, Clover Imaging Group and Digitek””were the event’s Official Sponsors. Thanks to them, who effectively absorbed all production costs, we were able to expand the breadth and scope of the affair while continuing to donate 100% of all proceeds to our designated charities.

In addition to their fundraising efforts””and their purchase of an event table at $5,000″”MWAi contributed further to the event by hosting an after-party, featuring cigars and cordials on the event’s premises.

Sharp once again donated a whole team of audio/video professionals””along with all of the A/V equipment””who were very receptive to incorporating several new elements into this year’s program. These included larger video displays, enhanced video components and music cues for select presenters and award winners, among others.

Everbank also provided additional support by providing bus service to and from the hotel reserved for out-of-town guests, in addition to their purchase of two event tables at $10,000 total and their Official Sponsorship of our Annual Dealer Survey””the results and analysis of which determine all of the Frank award winners””for the second consecutive year.

Most importantly, more dealers attended this annual event for the first time in over a decade. To them along with everyone else who attended, made donations, contributed time and further enhanced the overall energy of our 30th anniversary event, we are sincerely thankful and look forward to seeing as many of you as possible next year along with more new faces.

…Square 9, Clover Imaging Group and Digitek for their Official Sponsorship of the Anniversary Event.

…Everbank, for their Official Sponsorship of the Annual Dealer Survey and for once again providing guest transportation.

…MWAi for their $31,740 contribution to our Esophageal Cancer Research Grant and for hosting the after party.

…Sharp for once again providing all requested A/V support.

…LDI Color ToolBox for once again providing the blow-ups, badges and table cards.

…U.S. Bank for their $7,500 contribution to Adopt-a-Soldier Platoon.

Dealers Rate Their Vendors in Our November Survey...