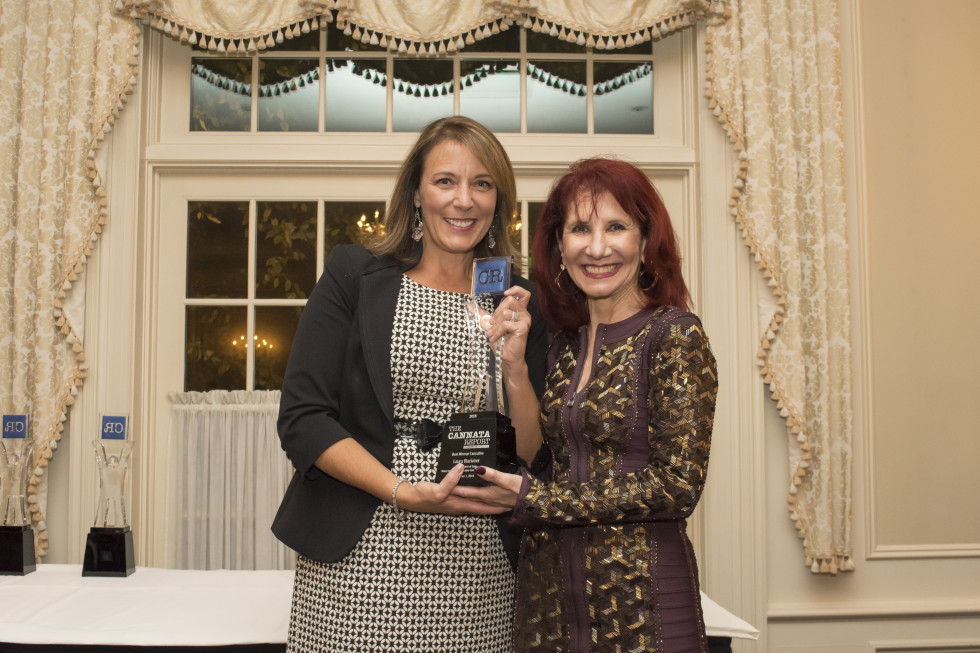 The Cannata Report’s Award-Winning Sharp Executive Emphasizes “Intention Versus Impact,” Seismic Change and the Real Relevance Behind Diversity in Business Laura Blackmer, SVP of Sales at Sharp Imaging and Information Company of America (SIICA), recently won the inaugural “Best Woman Executive” Frank Award at The Cannata Report’s 30th Anniversary Awards & Charities Dinner last month. When The Cannata Report’s SVP of Client and Creative Serves Carol Cannata announced her as the winner, Blackmer received a standing ovation from an audience of clients, colleagues, partners and competitors. The audience’s enthusiastic and supportive reaction made for one of the evening’s most remarkable and memorable moments.

In her acceptance speech, part of which is featured in The Cannata Report’s “Take 30″ event video short, Blackmer emphasized the importance and true relevance of diversity in business. I had the opportunity to discuss that theme further with Blackmer, along with other current business challenges, in a recent exclusive interview.

CR: Winning a Frank Award for “Best Women Executive,” as voted by dealers, is quite an accomplishment for any executive but especially as a woman who has been in the SMB Technology industry””often perceived as an old boy’s club””for less than three years. What do you perceive as the most substantial challenges in your role?

LB: The biggest challenge that my colleagues and I tackle every, single day is deftly bridging the companies within Sharp together””whether it’s SIICA, Sharp Corporate or any other division””for our independent dealer customers so that all sides are very satisfied with the relationship. A dealer always has an agenda, whether it’s finding new markets, growing their business, reducing expenses, etc. We have to consider paths across the different Sharp companies that benefit both sides.

In order to do that, we must first be aware that every decision we make has an impact. I used to refer to this philosophy as “˜the end of the whip’ or “˜intension versus impact.’ Someone cracks the whip, and what ultimately happens is often unpredictable, whether it’s a financial, product or program decision. Before I make a certain decision, I think, “˜Okay, if we receive a positive reaction from our customers, we’ll be in a good place. If we receive a negative reaction, how do we mitigate risk and make it work?’ You could have the best intentions in the world and still garner a negative impact, so you have to constantly think about exactly how every decision will affect your customers.

CR: As a senior level professional who has worked outside of this industry throughout your career to date, what attracted you to our industry and your current position at Sharp?

LB: It initially came down to what Doug Albregts [President of SIICA] was looking to accomplish. Then, I did my own research, which included talking to people in the industry. What I saw was an industry ripe for change. It was also so clear as to what the change was going to be and that it would be seismic.

The opportunity to take part in the rebuilding of something that’s been in place forever is much more alluring to me than just managing. I love to be a change agent that helps companies move from point A to point B, and I feel that’s something I’m really good at.

Back to Doug, he’s great leader. He was so passionate about what he was doing. It was hard not to get caught up in that.

CR: During your spontaneous, yet eloquent, acceptance speech, you acknowledged The Cannata Report’s efforts in spotlighting the contributions of women and young people in the industry. From your perspective, why do you think that’s so important today?

LB: Even though the balance between men and women in technology is getting closer to even, women are still less likely to be in technical and engineering-type jobs. This is an issue that’s broader than our industry, but I do think ours is further behind than others. While companies like Facebook, Google and Yahoo! are more progressive, we’re way down this continuum, and I don’t think we were even aware of it until about three or four years ago.

LB: That said, the industry has been lagging behind because it hasn’t been under the same type of pressures as other business. But now, we have to make this industry attractive to women and young people””new talent in general””because there will be a huge group of people retiring in future years, and no one with the necessary skills to replace them. It’s encouraging to me when I meet dealers with wives and daughters””and sons””involved. I think, “˜Yes!’

To be at the forefront of technology, we need more of that next generation that is comfortable with critical areas like the cloud and mobile applications and devices. I think The Cannata Report has brought that to the forefront with franchises like “Women Influencers” and “Young Influencers.” To attract more diverse talent, it has to be done on a broader stage where the focus is on people, whether it’s women, the younger generation or another group. It’s nice to talk about women and diversity from a humanitarian perspective, but this is really a business issue””similar to the necessity of figuring out how to work with millennials. It’s about attracting as diverse a pool of talent and perspectives as possible.

CR: As a prominent business technology executive holding a position that requires you to consistently travel to a diverse combination of primary, secondary, tertiary markets and beyond, what do you perceive as the biggest challenges facing small business, e.g., the customers of your independent dealer partners?

LB: What’s interesting is that the issues are not that different. Whether I’m talking to a dealer in San Francisco or in a small market in Wisconsin or Oklahoma, they are all thinking about and struggling with the same two things: 1) how do they accelerate growth and 2) how do they get the right people to do it. The latter is the No. 1 issue. If a dealer is looking for people with experience, that pool is shrinking. If a dealer is looking to bring on a new sales rep, she or he needs a much more thought-out on-boarding plan than ever before.

To me, staffing is a universal issue, and it’s our job as a manufacturer to help our dealer customers with these issues. We should be as invested in their businesses as they are in ours. If we don’t and we aren’t, then we are not doing our jobs.

CR: The dealer community is at a crossroads here in the U.S. Given the maturity of the market pertaining to the copying and printing of documents, what do you see as key for dealers to sustain their businesses moving forward?

LB: I think we’ve always pointed toward [new areas like] MPS and [software] solutions, but I think our challenge is applying that type of answer across the board. We need to be thinking about dealers individually. What is their end game? Some dealers are great at bringing new technologies to customers. If they can do that in an exceptional way, they’ll have a great business model. For other dealers, it’s much more challenging. There’s no formula. So [as a manufacturer], you really have to understand the dealer’s endgame and help them with whatever they need. Conversely, every dealer principal needs to be introspective and think about where they really want to go. Overall, Sharp has become much better at working with dealers in these capacities.

CR: Looking into the future, what’s going to make the biggest impact on the business technology industry in the next few years?

LB: I think there are two big things that are going to happen, and neither has to do with technology. One is the aging dealer principal population. There are so many dealers selling their business, not because it isn’t strong, but because they have no one to pass it on to.

It’s similar on the manufacturing side with the business consolidation that we’re experiencing. Considering that distribution points are shrinking, we have to step back and ask ourselves, “˜Is this the right model?’

Second, as I’ve said before, is our ability to find enough of the right talent. You still need people. Dealers Rate Their Vendors in Our November Survey...