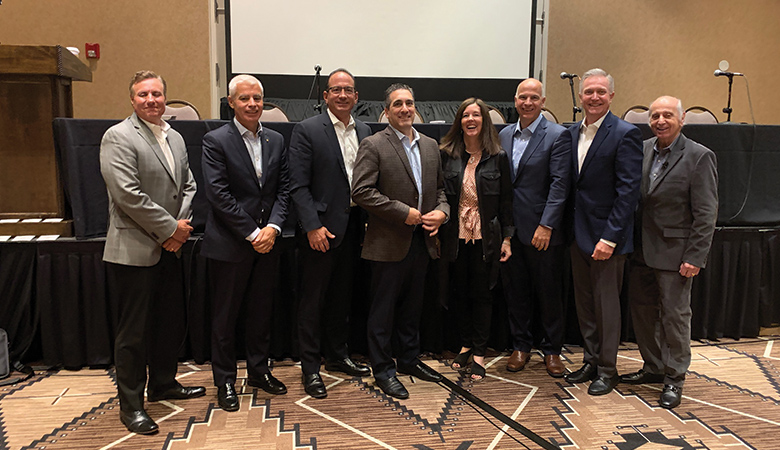 One more time we were asked to moderate a panel of industry executives. This time it was SDG acting as our host for their meeting in Albuquerque, New Mexico in early October. Similar to the one CJ and I did for American Co-Op, it was a very enlightening experience. This time we had a larger panel with Oscar Sanchez of Kyocera, Mike Marusic of Sharp, Sam Errigo of Konica Minolta, Larry White of Toshiba, John Stewart of Ricoh (sitting in for Jim Coriddi), Mike Pietrunti of Xerox, and Tami Beach of HP.

Just as we had done with the American Co-Op panel, we asked the group for their questions, and we received a very good response.  It was interesting to compare the questions from the previous group and I was truly happy to see many of the same questions. That confirms what is foremost on dealers’ minds.

The most common questions were supply chain and backorders, the decline of cost-per-page, diversification–what dealers will be selling in five or even 10 years from now–and mergers and acquisitions.

The time allotted was two hours and my concern was that would be too long. To ask a dealer group to sit for two hours and not become disinterested could be problematic. We are happy to say they were very attentive and were active during the Q&A.

The result was the panel was responding to their questions and not ours.  They were interested and Carol, who was my photographer, claimed the audience was very much into what the panel was saying.

We said on our most recent Fridays with Frank episode that the American Co-Op panel was the best we have ever been involved in. SDG did them one better. Both were great hosts—Tim Renegar from Kelly Office Systems in Winston Salem, North Carolina for American Co-Op and Phil Houser of Document Solutions in Albuquerque, New Mexico for SDG. Both pulled out all the stops in making people feel welcome. Carol was not with us in North Carolina, however, she said this was the best dealer meeting she has ever attended.

Perhaps this is what we can expect in this post-pandemic period. An appreciation of an opportunity for dealers to come together and share best business practices and learn from guest speakers. It was a total win for everybody.

What made the SDG event so special was the welcoming reception at Phil Houser’s home complete with a Mariachi band. That was the way it started, and it ended with the Balloon Festival which is something you must see to believe.

We have all been through a difficult period with some experiencing worse times than others. No one escaped this infectious disease. Being down (in seclusion)  for a long period was a challenge and we are so grateful that no one in our family and all those working with us were not victims of COVID-19.

Even our most recent travel was not that bad. The trip to Winston Salem in September was the first time we were on an airplane since February 23, 2020. On the SDG trip, we had two hosts Phil Houser and his lovely wife Theresa and Kevin Simpson Southwest Copy and his pretty lady Allie who took us to the Balloon Festival and dinner that evening. They are members of CDA and while in Albuquerque we wanted to visit with them.

The SDG meeting was a great event and most of all the hospitality and the opportunity for social interaction was a positive experience. We are looking forward to attending more dealer meetings and conferences in 2022.

We already have two on the calendar. The first is an EFI Connect Conference in January and Printing United in October. We fully expect to be attending meetings for Konica Minolta, Kyocera, Ricoh, Sharp, and Toshiba. We will be attending at least one of the BTA meetings and can only hope they have one in the Northeast. As for some of the other groups CDA, BPCA and, ICDA that have invited us in the past we will learn if they have any interest in our appearing on their schedule in 2022 over the next few months.