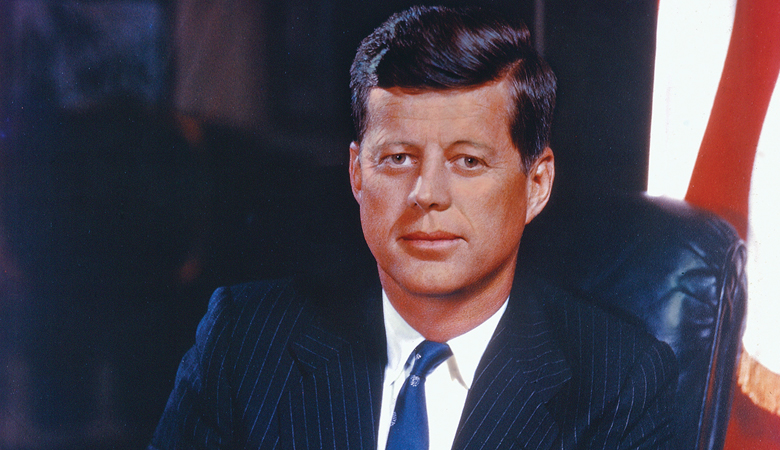 A war hero and president who stood firm when his country was on the brink of nuclear war.

John F. Kennedy was the 35th president of the United States. He was born in May 1917 into wealthy circumstances with political ties from both his mother, Rose Fitzgerald Kennedy, and father Joseph P. Kennedy.

Joseph Kennedy was a financial supporter of Franklin Roosevelt’s campaign for his presidency in 1932. Kennedy’s reward was being appointed as the first secretary of the Security and Exchange Commission from 1934 to 1935. In 1938, he was asked to serve as ambassador to the Court of Saint James in England.

The Joseph Kennedy clan of nine, including John, traveled with their mother and father to England. The ambassador was ordered back to the United States in 1940 because of his defeatist attitude toward the United Kingdom.

John F. Kennedy, by virtue of his experience in the U.K., wrote a thesis in 1940, his senior year at Harvard, entitled “Why England Slept.” It examined the buildup of German power in the 1930s. In some ways, it alluded to Churchill’s 1938 book, “While England Slept.” Kennedy believed we had to be prepared for war, and he joined the Naval Reserve in October 1941.

He used his father’s political influence with James Forrestal, Secretary of the Navy, to obtain an overseas duty station. The 25-year-old Kennedy was assigned to command a patrol torpedo boat, PT-109, in the South Pacific after arriving in April 1943.

The most famous collision in U.S. Navy history occurred on August 2, 1943. Kennedy’s boat, PT-109, was rammed by a Japanese warship and split in two. Two sailors died, and Kennedy’s back was badly injured. Despite his injury, he hauled a wounded sailor by the strap of his life vest and led the survivors to a nearby island where they were rescued six days later.

The incident earned Kennedy the Navy and Marine Corps Medal for “extremely heroic conduct” and a Purple Heart.

Those same injuries caused the Navy to release him from active duty. On March 1, 1945, he was placed on the retired list. While he was honored by the Navy and lauded for his courage, he was haunted by the loss of the two men.

Upon his return, Kennedy was often told how fortunate he was that 11 men were saved to fight another day and ultimately return home. “Lucky! Yes, it was lucky except for the two men who died that night.”

The story of PT 109 was picked up by the writer John Hersey and published in The New Yorker on June 17, 1944, and later in Reader’s Digest magazine. The recounting followed Kennedy into politics and provided a strong foundation for his appeal as a leader.

In 1952, Kennedy was elected senator from the state of Massachusetts, and in 1956, he published a book, “Profiles in Courage,” ghostwritten by Ted Sorensen, a longtime associate and friend of Kennedy. It earned a Pulitzer Prize.

In 1960, Kennedy won the U.S. presidential election by a narrow margin and carried the Electoral College 303 to 219, beating Richard Nixon to become the 35th president of the United States. He was the youngest man and first Catholic to hold that office.

How did Kennedy’s military service prepare or make him better able to serve as our president? His experience under fire certainly gave him a good understanding of leading while under a great deal of stress. The loss of two of his PT-109 crew made combat losses personal to him and would cause him to think long and hard about committing our armed forces to any kind of skirmish or war.

During the Cuban missile crisis, Kennedy showed his maturity and coolness under fire when facing the potential of a nuclear war with the Soviet Union, a major confrontation at the height of the Cold War in October 1962. The cause was the presence of Soviet nuclear-armed missiles in Cuba. During this time, he quietly sought advice from former President Eisenhower.

Kennedy recognized he needed time to gain the support of the American people and hold back those in the military who were ready to go to war. His response was a blockade that would stop all Soviet ships heading to Cuba at sea, an act of war.

A nautical do-not-cross line was established, and American warships were prepared to stop all Soviet vessels heading towards Cuba. At this incredibly intense time, Kennedy made a statement that gives us a small example of the pressure he was under.

“I would like to give a copy of Barbara Tuchman’s book Tower of Babel to every man who thinks war is the best course of action,” said Kennedy.  This book was about World War I, and Tuchman made a compelling case that it should never have happened. The estimated casualties of that war were approximately 20 million dead and 20 million wounded.

The Cuban missile crisis lasted from October 16 to October 28, 1962, when the Soviet Union agreed to withdraw their missiles.

Some of Kennedy’s accomplishments during his brief tenure as president came in the arena of foreign affairs. He also conveyed a powerful message to the young men and women of that period, encouraging them to serve our country in many ways. Bill Clinton claims it was Kennedy who inspired him to get involved in politics. Others joined the Peace Corps, which Kennedy created by executive order in 1961. By the end of the century, more than 170,000 Peace Corps volunteers would serve in 135 countries. Also in 1961, Kennedy created the Alliance for Progress to foster greater economic ties with Latin America, in hopes of alleviating poverty and thwarting the spread of communism in the region.

At the head of the list of accomplishments, the Nuclear Test Ban Treaty that was ratified on October 7, 1963, must be considered his greatest accomplishment. He reduced the threat of a nuclear arms race. The treaty prohibited nuclear weapons tests or other nuclear explosions under water, in the atmosphere, or in outer space. It did allow for underground nuclear tests if no radioactive debris fell outside of the boundaries of the nation. This drastically slowed down the further development of nuclear weapons.

One of the saddest days in our nation’s history was November 22, 1963. President Kennedy was in Texas for a campaign appearance. He was in a Lincoln Continental convertible with his wife Jackie and Texas Governor John Connelly. They rode through Dallas with crowds of people cheering them on.

We can only speculate what JFK could have accomplished had he spent two terms in the White House. Would history have taken a different course had he lived to a modest old age? As historian Arthur Schlesinger Jr. wrote it was, “as if Lincoln had been killed six months after Gettysburg or Franklin Roosevelt at the end of 1935 or Truman before the Marshall Plan.”

The image of Kennedy’s presidency, and of his whole life, is that of Camelot, the idyllic castle of the legendary King Arthur. As his wife Jackie said after his death, “There’ll be great presidents again, and the Johnsons are wonderful, they’ve been wonderful to me—but there’ll never be another Camelot again.”

Kennedy had his detractors. Victor Lasky, author of J.F.K.: The Man and the Myth, was not gentle: “Under Kennedy, nothing of any major consequence bearing his stamp made much headway in the early years of the New Frontier. Seldom before in U.S. history has any president been so consistently rebuffed by the legislators—not of the opposition party, but of both parties. The hostility to Kennedy’s proposals was not partisan. It was bi-partisan.”

To explain the reasons Kennedy was so challenged by the members of his own party would take quite a bit of writing. Allow me to cut right to the chase. The Democratic party prior to the signing of the 1964 Civil Rights Act under President Lyndon Johnson was well represented by the Southern states. The South was solidly Democratic and had been so since reconstruction. Kennedy had a civil rights agenda, and the southern Democrats wanted no part of it. They held seniority in all the key positions in the House and Senate. Any bill advocating civil rights was doomed for failure. Dwight Eisenhower wanted to do more in this area, but he could not for the same reason.

John F. Kennedy is rated among the top 10 presidents in the United States, according to Wikipedia.

The Making of the President 1960 by Theodore H. White

From the Editor’s Desk: Your Numbers Are Up