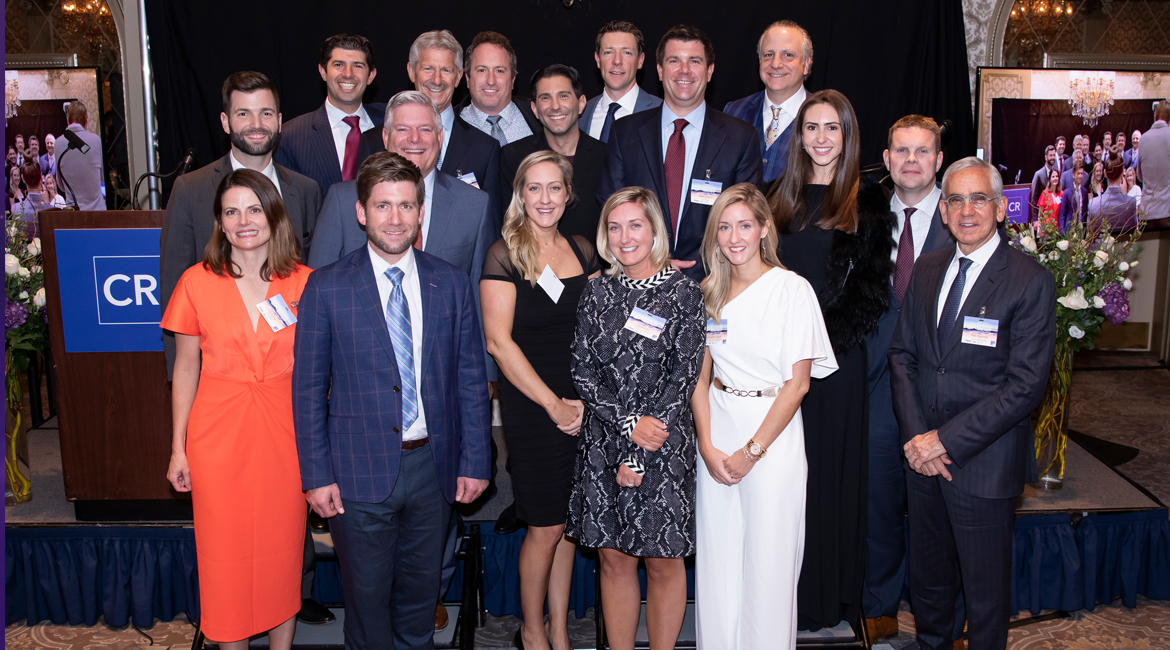 Click here to Watch “ELEVATION: Highlights from The Cannata Dinner and After Party 2019” video short.

Above: Kyocera won the Frank Award in the category of “Best A4 Manufacturer.” From left to right: Scott Cullen and Oscar Sanchez, president and CEO, Kyocera Document Solutions America.

Held at The Madison Hotel in Morristown, NJ, on November 7, this year’s event was sponsored by Hytec Dealer Services, PSIGEN Software and Continuum. Our 2019 theme acknowledged that the industry is evolving and on the rise and we celebrated by putting a spotlight on its overall ELEVATION.

Joining us this year were a host of new guests and we are grateful to the many executives who traveled from all corners of the U.S. to attend. Our guest list included representatives from all segments of the industry, including manufacturers, dealers, leasing, software, solutions, and IT.

We were especially pleased to welcome so many dealers at the dinner this year. It was our pleasure to recruit several of them to take part in our awards ceremony to announce three Frank Award winners. We also took the opportunity to salute the dealer principals and their next generation successors who were in attendance by inviting them on stage for a photo opportunity that provided an exciting glimpse into the future of the dealer channel.

Of course, the highlight of the evening was the announcement of the winners of the Frank Awards. Winners of the awards are determined by the results of our 2019 Annual Dealer Survey sponsored this year by TIAA Bank for the 6th year in a row. New this year was an award that recognized excellence in IT Services. While winning streaks continued for several companies, there were a few surprises at the podium that made for an exciting evening.

Konica Minolta and Sharp tied with 3 Frank Award wins each. Konica Minolta kicked off the evening with a win for Best Production Print Manufacturer, accepted by Kevin Kern, senior vice president, BIS and product planning. Konica Minolta’s Nicole Purdy, vice president, strategic pricing also stepped up to the podium for Konica Minolta to accept the award for Best Marketing Strategy, its third consecutive victory in that category. Konica Minolta’s final award of the evening was for Best Female Executive and Laura Blackmer won once again. She is the only executive to win the award since it was introduced 5 years ago. Blackmer was unable to attend the event and Victoria Ringwood accepted the Frank Award on Blackmer’s behalf.

As for Sharp’s three wins, Shane Coffey, vice president, product management made two trips to the podium to collect the Frank Awards for Best-in-Class Manufacturer and Best Manufacturer. Sharp’s third win of the night was the Frank Award for Best Male Executive presented to President and CEO Mike Marusic. Doug Albregts, Sharp’s former president and CEO and winner of last year’s Best Male Executive trophy stepped up to the microphone to announce Marusic’s win.

Kyocera was the winner of the Frank Award for Best A4 MFP Manufacturer. CEO and President Oscar Sanchez accepted the trophy, Kyocera’s second consecutive win in the category.

GreatAmerica was victorious as the Best Leasing Company, its fifth win in a row. It is the only leasing company to win the award since it was introduced in 2015. Jennie Fisher, senior vice president and general manager, accepted the award on behalf of GreatAmerica.

The Cannata Report invited “next generation” dealers to present the awards that represent new horizons for the dealer channel. Adam Weiss, general manager, Atlantic, Tomorrow’s Office, announced ACDI as the winner of Best Print Management/Software Provider. ACDI seemingly has a lock on this category, winning the award for four years in a row. Mark Hart, executive vice president, business development and Josh Lane, president, accepted the award on behalf of ACDI.

One of our favorite moments of the evening–and one that we think will be remembered by all in attendance for a very long time–came when Chris Scarff, executive vice president of Ray Morgan Company stepped up to the podium to accept The Cannata Report’s Humanitarian Award honoring Ray Morgan Company. Everyone in the industry has been inspired by both Scarff and his partner Greg Martin for the extraordinary fundraising campaign they launched to support not only their employees but all who were devastated by the Camp Fire in Northern California in November of 2018. To date, Ray Morgan Company has raised and donated more than $800,000 to assist those affected by the fire that decimated Paradise, California where 17 Ray Morgan Company employees lost their homes as well as those affected in the surrounding communities. Scarff’s heartfelt remarks moved everyone in attendance at the event, prompting a much-deserved standing ovation.

We thank our emcee extraordinaire Robert Goldberg for his “buttoned-up” remarks about Larry Weiss of Atlantic, Tomorrow’s Office’s appearance on our September cover. While not an official Frank Award, Carol C. Cannata did bestow a special commemorative sewing kit to Weiss to keep handy the next time he graces a magazine cover.

This year’s after party, sponsored by Xerox and Nexera, once again featured live music from Skyline Drive Orchestra. Who knew that the imaging industry had so many great dancers? We were especially thrilled to see our 2019 Women Influencers–Erica Calise of Sharp, Megan Lujan of Toshiba, and Vicky Ringwood of Konica Minolta–front and center together on the dance floor. Carol C. Cannata outdid herself once again and created her signature “Chocolate Infusion” dessert buffet with the hotel’s chef. A special thank you to Jim D’Emedio and David Clearman of Muratec for creating the labels (three cheers for production print!) for our take-home pastry box and water bottles.

We have so many people to thank for their support and generosity. Many thanks to LDI Color ToolBox and Jerry Blaine, Brian Gertler and Michael Schloss for making us look good year after year with cover posters, badges and table cards that underscore the tremendous power of print.  A special thanks to Gertler for his amazing photographs, many of which you see on these pages. We send our thanks to Sharp and James Campion and John Menzzasalma for once again producing our Frank Awards ceremony with wit and wisdom and patience. And thanks to Larry Weiss and Luis Villa at Atlantic, Tomorrow’s Office for their contributions as well.

Special thanks go to Eric Aumen, president and CEO, Hytec Dealer Services; Victoria Hensley, COO, PSIGEN; and John Schweizer and Geoffrey Willison of Continuum a ConnectWise company for serving as official sponsors of The Cannata Report’s 34th Annual Awards & Charities Dinner. Their generous sponsorship support makes it possible for us to donate 100% of the evening’s proceeds to Tackle Kids Cancer.

Above: ACDI won the Frank Award in the new category of “Best Print Management Software Provider” for sales and support of PaperCut on the heels of winning the retired “Best Software Provider” Frank Award for the past three consecutive years. From left to right: Mark Hart, executive director of business development, ACDI; Adam Weiss, GM, Atlantic, Tomorrow’s Office (presenter); and Josh Lane, president and CEO, ACDI.d

Managing It: Making the Right Connections