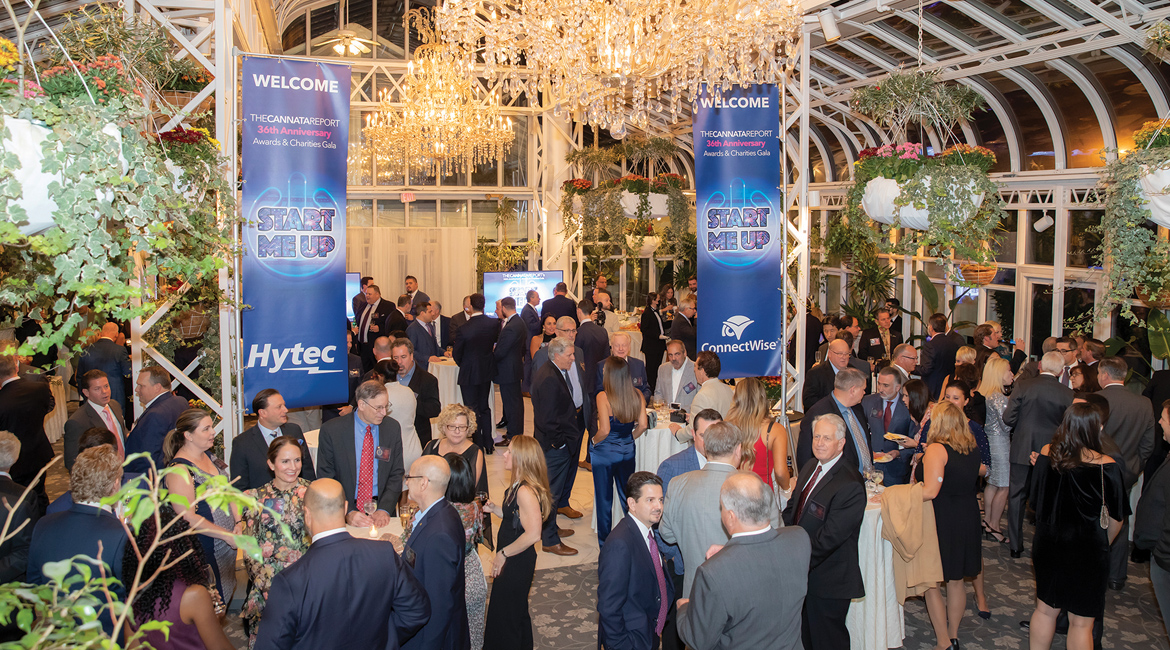 When the team at The Cannata Report began to make plans for this year’s 36th Anniversary Awards & Charities Gala, the overriding consensus was that our event had to be the best ever. After lockdowns, travel limitations, too many video calls, not enough in person meetings, and an aching desire to spend time with colleagues and connect with industry friends, we challenged ourselves to host a party that was true to the event’s DNA of camaraderie and charity while taking it to the next level. We humbly feel we accomplished all that and more with an event that awarded industry excellence, recognized leadership, and celebrated the simple fact that we were all together again. We had fun. We hope everyone in attendance did too.

The Cannata Report’s 36th Anniversary Awards & Charities “Start Me Up” Gala, sponsored by Hytec Dealer Services and ConnectWise raised $152,000 to support research conducted at Hackensack Meridian John Theurer Cancer Center at Hackensack University Medical Center. To date, The Cannata Report has collectively raised close to $1.3 million through donations and matching funds for Hackensack University Medical Center Foundation. Since the inception of what has long been referred to as the Cannata Dinner, The Cannata Report has donated nearly $3 million to a number of charities nationwide.

Held at The Madison Hotel in Morristown, N.J., the Gala included some of the traditional elements everyone reveres and featured some new elements we hope everyone enjoyed.

Taking a cue from last year’s virtual Gala, we invited some of the most prominent and groundbreaking dealer principals and executives to present the Frank Awards this year. It’s a thrill for us to get the leaders from the dealer channel front and center on our awards stage to announce the winners, and we are grateful to them for their support and enthusiasm. Having dealers serve as presenters further underscore that the Frank Award winners are determined by our Annual Dealer Survey and represent the voice of the independent dealer channel. 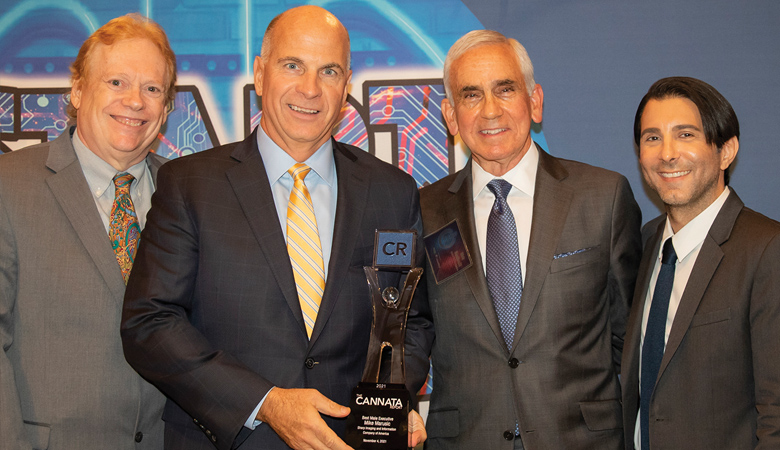 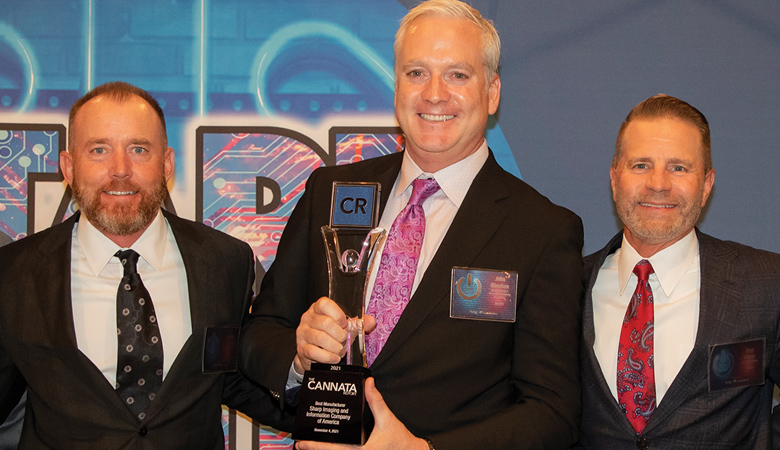 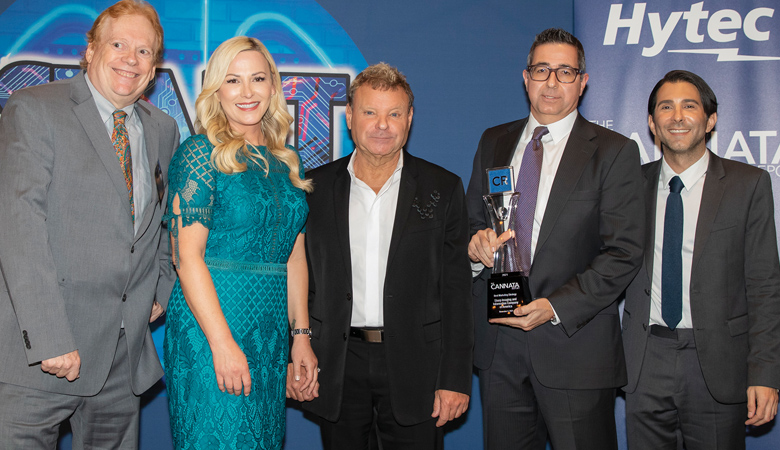 Sharp was in the winner’s circle with three awards: Best Male Executive for Mike Marusic, his third win in three years; Best Marketing Strategy, its first recognition in this category; and Best Manufacturer, its third win in a row in this category. Ricoh USA was recognized with the Frank Award for Best Production Print Manufacturer and Best echnical Service Provider. Kyocera was recognized for the fourth year in a row with the Frank Award for Best A4 MFP Manufacturer. DocuWare was named Best ECM/Document Management Provider for the second year in a row. ConnectWise was given the Frank Award
for Best IT Services Provider and to date, is the only winner in that category since it was introduced in 2019. The winner of the Frank Award for Best-in-Class was Toshiba. Nancy Langdale of Canon U.S.A. was recognized as the Best Female Executive. Rounding out the winner’s circle was GreatAmerica Financial Services, winner of the Frank Award for Best Leasing Company for the 6th consecutive year and to date, the only company to win in the category. In the Best Print Management Software Provider category, PaperCut was the winner and shared the podium with partner ACDI, a member of its Global Channel-centric Ecosystem. 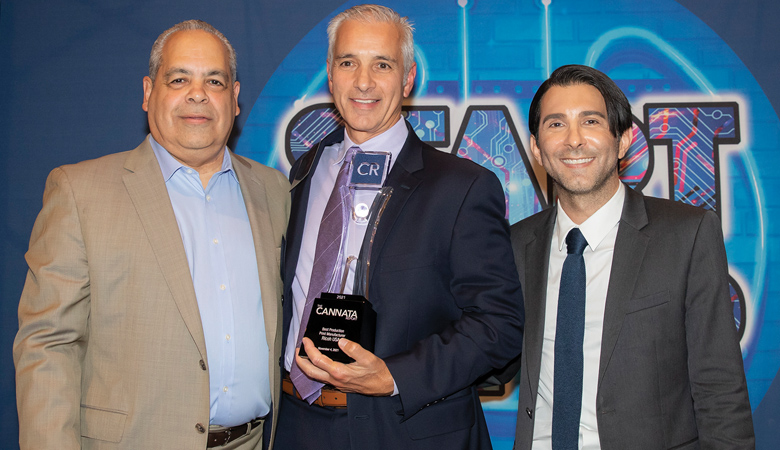 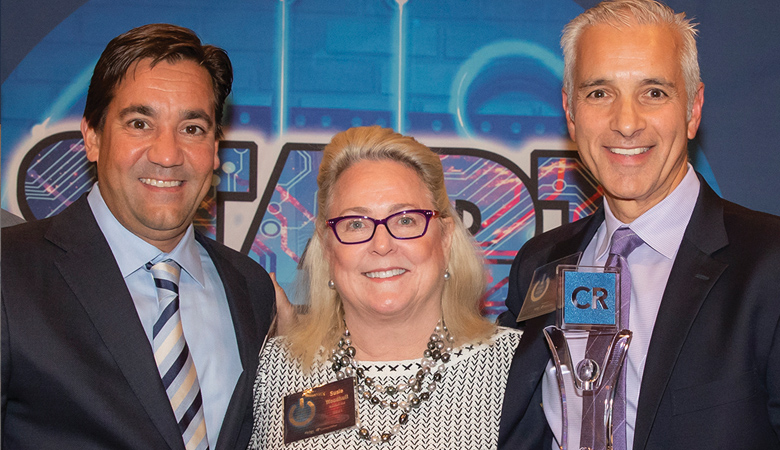 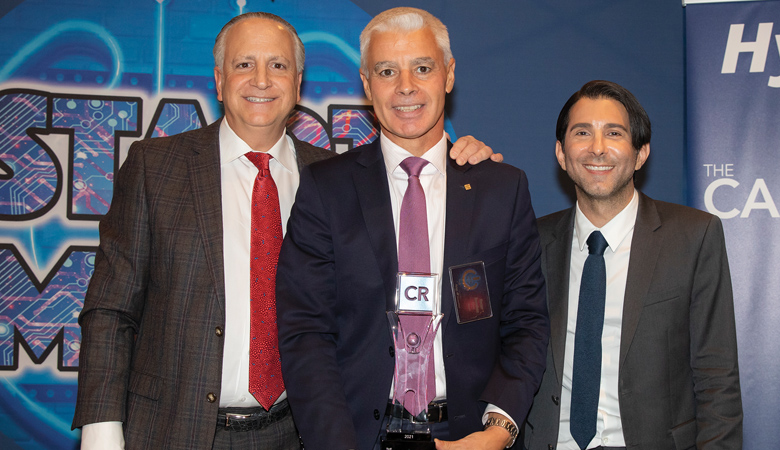 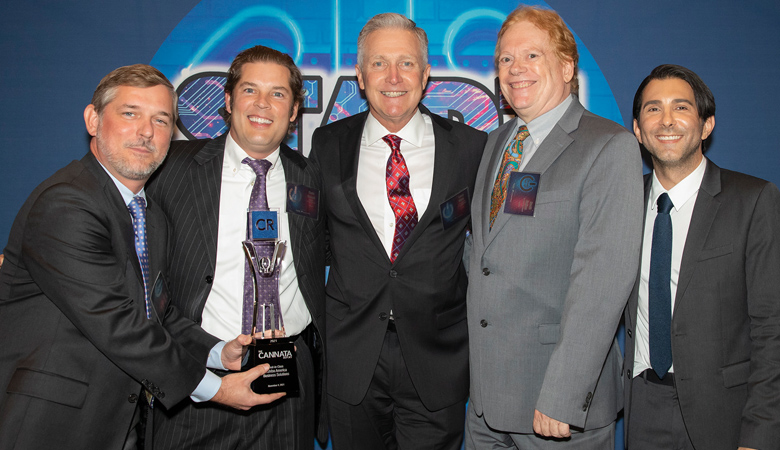 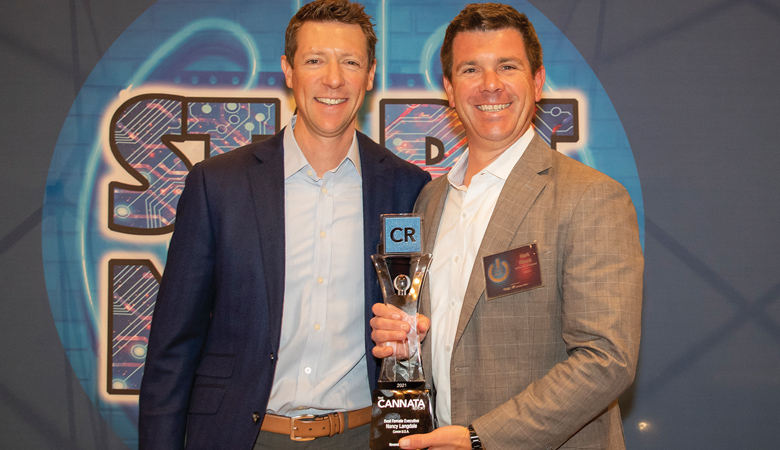 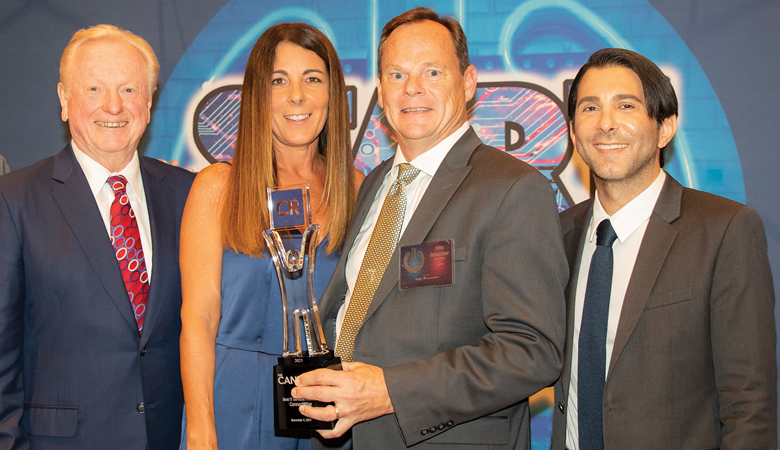 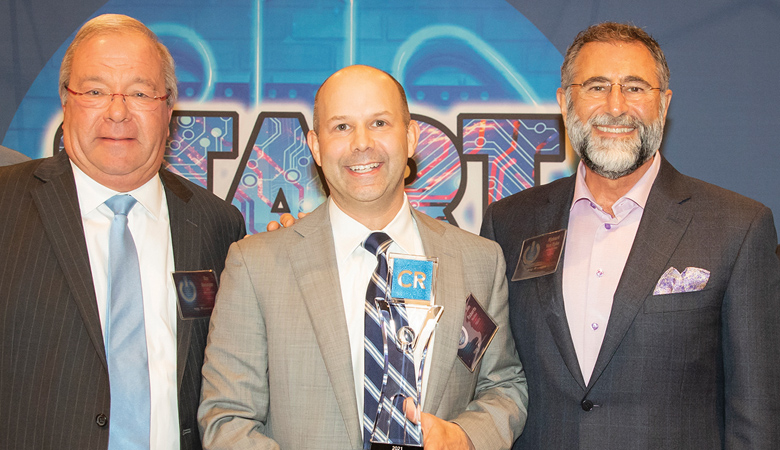 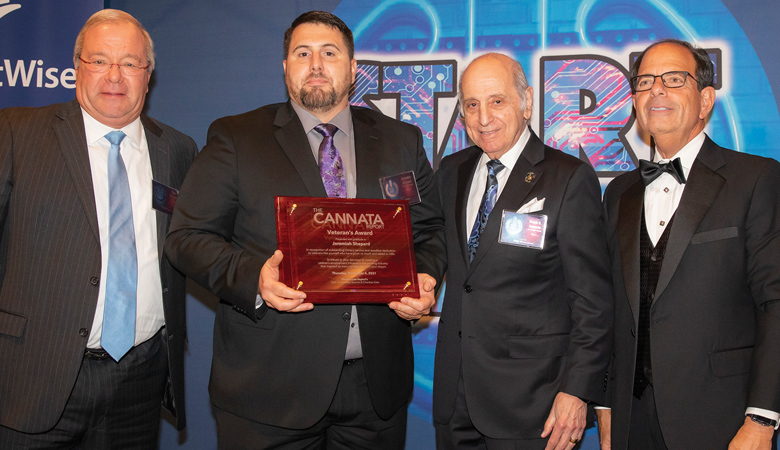 With the creative direction and support of Atlantic, Tomorrow’s Office’s Larry Weiss and Luis Villa, we were fortunate to spotlight our winners on an entirely new stage design. Atlantic also created some dazzling large-format signage throughout the event. LDI Color ToolBox’s Jerry Blaine and Brian Gertler made us look good with vibrant new elements, including electronic signage and premium collateral materials. And once again, the Sharp media production team coordinated our awards presentation.

We were privileged to have Bob Goldberg, BTA general counsel, as our emcee. Carol C. Cannata crafted an extraordinary cocktail hour and dinner tasting menu with a few new twists. CJ Cannata orchestrated a classic rock and roll “soundtrack” for the awards presentation inspired by this year’s theme, Start Me Up, The Rolling Stones’ smash hit. His soundtrack for this year’s Gala and after party consisted of a stylistic variety of rock songs dating back to the British Invasion in 1964 – when the Stones broke in the US – through 2021. 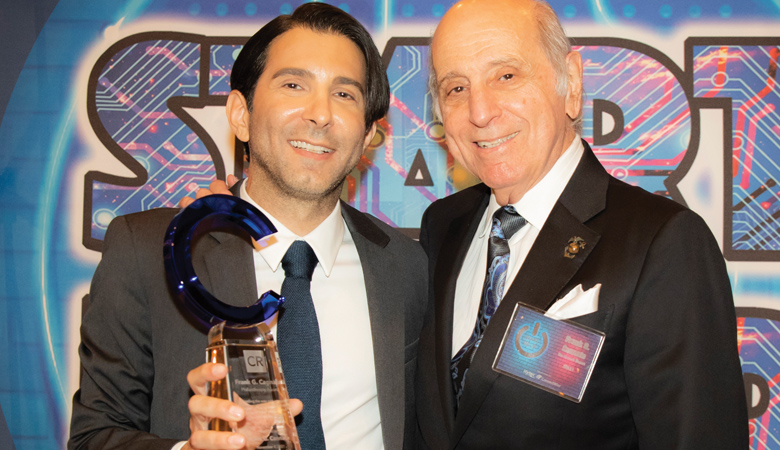 Above: CJ Cannata bestows the Frank G. Cannata Philanthropy Award to The Cannata Report’s founder in recognition
of a lifetime of service and fundraising.

A special highlight of the night was the inaugural Frank G. Cannata Philanthropy Award presented to our founder. Through our annual charity event that he has overseen since its inception, he has collectively raised nearly $3 million for charities nationwide, including close to $1.3 million for Hackensack University Medical Center Foundation. In addition, Frank has worked tirelessly, and often anonymously, throughout his career to raise funds for many organizations, veterans’ initiatives, and individuals. Frank G. Cannata was given the award named after him by CJ Cannata, our president and CEO. The night ended with a video saluting Frank featuring over 40 of the leading executives in the business technology industry. In the future, the Frank G. Cannata Philanthropy Award will be given annually by The Cannata Report to honor an individual in the business technology industry who emulates Frank and inspires others with their philanthropic endeavors and giving spirit.

What made the event even more special was the people who shared our big night with us. Industry executives traveled from all throughout the U.S. representing all segments of the industry, including manufacturers, dealers, leasing, software, solutions, and IT.

Special thanks go to Eric Auman, president and CEO, Hytec Dealer Services, and John Schweizer, vice president, office technology, ConnectWise, for serving as official sponsors.  Their generous sponsorship support allows us to donate 100% of the evening’s proceeds to cancer research.