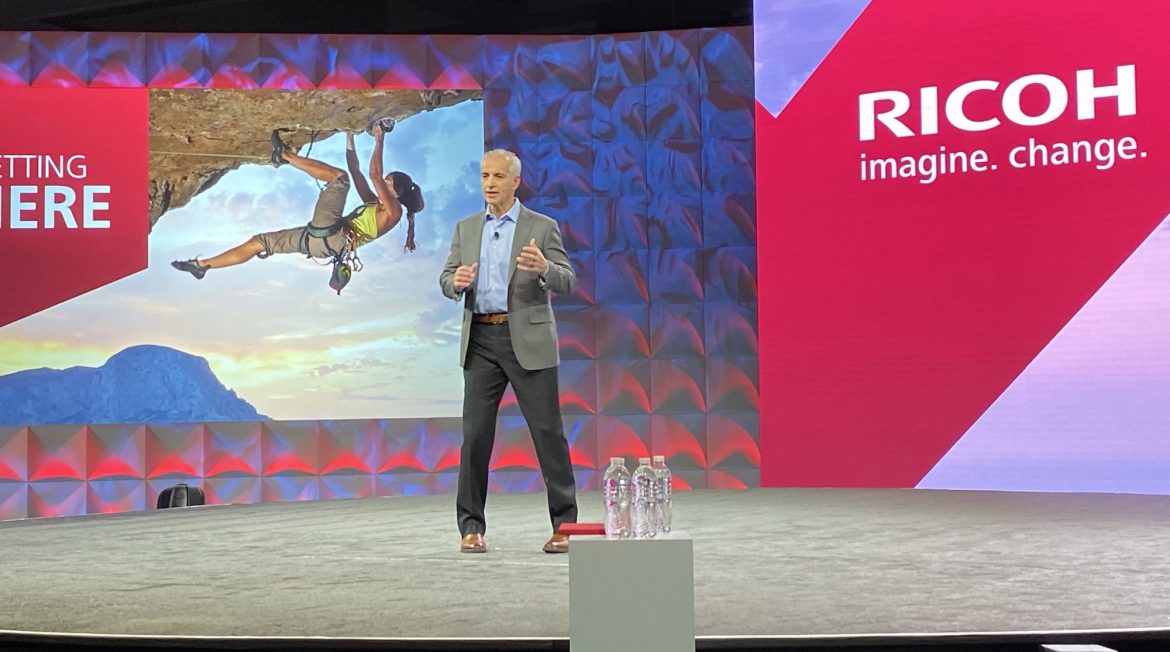 Above: Jim Coriddi kicks off the first day of ConvergX on Monday evening Nov. 18.

The week before Thanksgiving I traveled to Las Vegas for the third time in six weeks and the fourth time this year for the final dealer meeting of 2019, Ricoh ConvergX. For some, four trips to Las Vegas in a year is four times too many. For others, it’s like Barry White sang, “Just can’t get enough.”

If you’ve attended as many dealer meetings as I have since the early 1990s, you can get cynical about these events. Seen one, seen them all. But that’s not true at all. Of late, the OEMs seem to be shaking things up to better engage dealers and keep them out of the casino and in the General Sessions and breakout sessions.

Of late I have been pleasantly surprised by the agendas, the format, and the content of these events, including the creativity that goes into making these events a worthwhile educational and networking experience. Ricoh ConvergX was a prime example of a company thinking outside of “the box.”  Perhaps a better way to phrase that is a prime example of a company thinking beyond the box.

What follows are my 10 takeaways from Ricoh ConvergX, including examples of how Ricoh is doing their part to get its dealers to think beyond the box.

Above: Doug Pitassi of Pacific Office Automation (POA) accepts one of the awards won during the awards ceremony on Wednesday evening.

The Executive Suite – ConvergX attendees were primarily dealer principals and one or two key people from that dealership. The reason for the selective attendee list was that most content in the General Sessions and the breakouts was focused on high-level strategic initiatives.

Above: Suzanne Payer took over the emcee duties from Jim Coriddi and impressed everyone with her poise and delivery.

Beyond the Box – One had to venture deep into the bowels of the exhibit hall to find the Ricoh hardware. I can’t recall an OEM do something like this before. During the General Session, there were minimal deep dives into the company’s new and future hardware introductions. Instead, the emphasis was centered around providing attendees with insights as to how to be successful in a changing marketplace. It will be interesting to see if this “beyond the box” type of conference will be emulated by more OEMs. It wasn’t so long ago that another OEM took a similar approach and took some knocks for it. But that’s what happens when you’re ahead of the curve. Above: Heather Loisel talks marketing during one of the four General Sessions at ConvergX.

New Faces – I expected Jim Coriddi, vice president dealer division; Steve Burger, head of engineering, vice president technology marketing; and Joji Tokunaga, president & CEO to have key speaking roles during the General Session. But this event was also an opportunity for dealers to meet Suzanne Payer, vice president, channel, field and marketing communications; Heather Loisel, chief marketing officer, and Gavin Jordan-Smith, senior vice president, commercial and industrial printing business. Jordan-Smith and Loisel are new to Ricoh, while Payer is one of the company’s best-kept secrets. She took over the emcee duties from Coriddi and did a terrific job.

Ready to Sell Subscriptions – This is one of the fastest emerging trends in the imaging industry and Ricoh is another OEM that is working to convince dealers that subscriptions are the business model of the future…and now. Between presentations on today’s service economy during the General Sessions and breakout sessions devoted to Ricoh’s subscription model, the company provided dealers with plenty of reasons for moving in this direction. Are dealers ready to make that move? When asked how many dealers in the General Session were billing customers via a subscription model, few raised their hands. When asked how many want to do it, virtually every dealer in the room raised their hand. So, yes they are ready.

Dealing with DocuWare – Earlier this year Ricoh acquired document management company DocuWare. This company is no stranger to the dealer channel, and in The Cannata Report’s 34th Annual Survey, DocuWare was ranked by dealers as the number two ECM/document management company. As expected, Ricoh executives provided dealers with reasons why they should add this solution to their offerings. It’s still unclear if competitive dealers currently selling DocuWare will be comfortable doing so now that it is a Ricoh-owned company. It’s equally unclear if competitive dealers looking for a document management solution will consider DocuWare as an option. But one thing is for sure, Ricoh dealers have access to one of the leading document management solutions through their hardware provider.

Security Conscious – Security has become a checkbox that every OEM must check off or reference during their events, and Ricoh did an excellent job of underscoring its security initiatives during two of the four General Sessions. The event also offered dealers a sneak peek at Ricoh’s MFP Shield Technology, an application that runs on the device and gives dealers and/or the customer the ability to run security checks on their devices to select the security level. Multiple levels of security are available and according to Burger, it will automatically change the settings and print out a configuration showing the device is secure. Above: If there was anyone at ConvergX who knew everything there was to know about the production print space it was Ricoh’s Gavin Jordan-Smith. He gave dealers schooling about production during the third General Session.

Production Color on the Ascent – Coriddi reported that production color is a major growth area for Ricoh and that the combined performance of the C7200 Series and C9200 Series was up 21% this year. In addition, corresponding production integrated solutions revenue is up a little more than that. That’s a good thing considering Ricoh’s A3 and A4 sales are down about 5% while the aftermarket for those products was mostly flat for the year. Jordan-Smith, who is leading the company’s production and industrial print initiatives offered dealers a history lesson about production print. He also spoke about the digital and inkjet revolution in production print, where the market is going as well as how dealers can prepare themselves to capitalize on the production print opportunity.

Above: Steve Burger, back in the USA after a stint in Japan, had a lot to say as usual about Ricoh’s technological innovations and what dealers can expect from Ricoh in the future.

Hi-Tech! – There was no way a dealer meeting with four General Sessions could get away without mentioning new products and technologies—even one that was focused beyond the box. Even though the emphasis on new products and enhanced features was toned down from what many of us have been accustomed to in the past, it was still the focus of the third General Session. Burger spoke about the relationship with DocuWare and being able to offer dealers a cloud workflow solution. He also referenced new technology that dealers will soon have access to, including next-level device management via a partnership with ECi. Other developments that will raise the bar on future Ricoh products include voice commands, combining AI and Big Data, a new IoT platform. In addition, Amazon for Business has been integrated into Ricoh technology.

A Bridge to the Cloud – When Tokanuga told dealers “hardware won’t take us where we want to go,” he was referring to a traditional MFP and its traditional copy, print, and scan functions. With A3 on the decline, there’s a movement to reposition MFPs as cloud-connected devices. It will be interesting to see if customers buy into this, but as “the cloud” becomes more prevalent in the business world, positioning a legacy device with new features and capabilities as a bridge to the cloud is the smart way to go.

A Commitment to Work with Dealers of All Sizes – Even though Ricoh has relationships with mega dealers such as FlexPrint, UBEO, and Visual Edge, Coriddi emphasized that Ricoh is committed to working with dealers of all sizes. That commitment was visible at ConvergX when reviewing the list of dealers attending the event.

Office1 Expands in Nevada Via Partnership with Nevada Office Machines