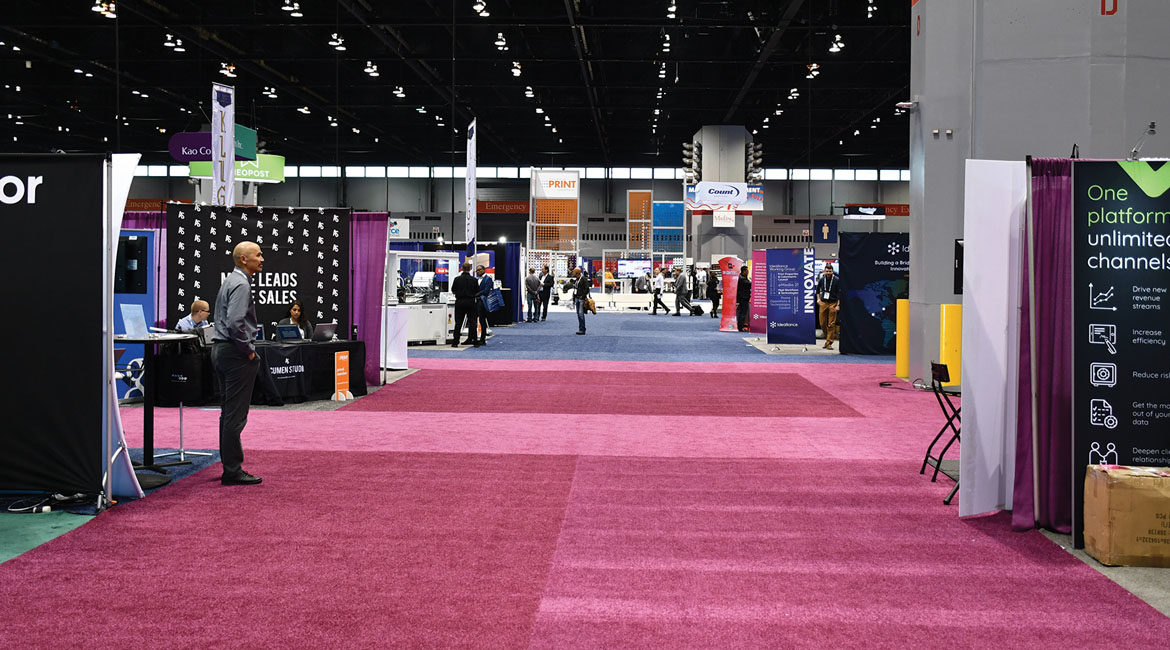 After 24 years, the end has arrived for the long-running production and industrial print  show in its current incarnation.

In 1996, I attended Graph Expo for the first time not knowing a whole lot about printing. Twelve months later (the year following drupa), this show morphed into PRINT, something that never made sense and which eluded me at the time. However, I haven’t missed a PRINT show since.

At PRINT 97, the Heidelberg booth was more than an acre in size. Every day when the show closed, the Heidelberg staff celebrated the sales of the day. Cheers and beers flowed readily. Not many years later, the “Big Iron” was gone.

I did some approximate math this week. Coming to this show for 23 years put about 60,000 miles in my frequent flyer account. It meant more than 110 nights in hotels and Airbnbs, several hundred dollars in cab and CTA fares, and a lot of shuttle bus rides. It was a forum for some memorable evenings in blues clubs, events at museums, the aquarium and planetarium, a couple of boat cruises, a U2 concert, and evenings in tall buildings with killer views. But this year, as my friend Roger Gimbel noted at a Xerox-hosted analyst dinner on the penultimate night, is the end of an era. Because barring some miracle, this is the last time what used to be North America’s premier print show will be held at McCormick Place. Next year, the plan is for PRINT to become BRAND PRINT Americas 2020 and move to the smaller confines of Chicago’s Donald E. Stephens Convention Center on September 15–17, 2020.

I came to the Windy City this year because I had client business in town the day before the show and because there were videos to shoot. A handful of colleagues in the press and analyst contingent were here too, but most acknowledged this was PRINT’s last dance at McCormick Place and that if nothing else, the slow, painful demise of this show was another indicator of how our industry has changed.

Why Would Anyone Go to a Show?

A few days before PRINT 19, I met with owners of several successful direct mail and transactional service bureaus along with the vendors upon whose equipment and software those bureaus rely. All agreed that the era of traditional shows was coming to an end. No one had any real idea if PRINTING United’s hijacked iteration of this event taking place in Dallas, Texas, October 23–25, will have any real influence on this or not, but it has hastened the demise of this show. Not that it needed much help.

Conversations on the floor at this final PRINT show were a continuation of those I’d been having with vendors and print service providers weeks before the show. One thing I kept hearing was that peer groups supported by equipment and software are better venues, particularly in terms of measuring ROI (I think of Dscoop, thINK, Ricoh Interact, Xeikon Café, and even Imaging Network Group). All print providers know a press or software is just technology and not the pathway to success. Technology must enable users to do things they could not do before, things that add value to their business. And most of all, they must be able to justify the cost of whatever they buy, have a real-world sense of the ROI, and confidence in how well some of their more challenging jobs will run on a new press or when using new software. The answers to these questions never come out of trade show booths. But they do come from conversations with peers and on multiday trips to a customer experience center (CEC).

At any show, the total number of warm bodies on the floor matters far less than who they are. But below a certain number, whether attendees are decision-makers or not, no vendor can truly justify the costs of shipping, staffing, drayage, and more. Vendors are all about generating and tracking how leads turn into sales. This is, at best, hard to do at trade shows. This makes vendors less willing to pony up the dollars for a show, and more likely to fly prime prospects to their CECs or support peer groups. In this respect, it is less surprising that the PRINT show is going away than that it didn’t fold years ago. It certainly should have or changed dramatically. As a result, this entire show could fit into the space required by two vendors back in its heyday. I am not alone in this thinking.

Graph Expo/PRINT has been in decline for over a decade. Show owners have tried different approaches but nothing has increased and maintained attendance. Lack of leadership and a delusional view of the industry and its trade shows did not help. In all fairness, it’s hard to overcome the broader industry trends of decreasing demand for print and increasing reliance on electronic media. There’s a lot more, of course, but this article is not about the gory details.

This final PRINT, occupying a fragment of the North (small) side of McCormick Place was, to be kind, a one-afternoon show. There was a flurry of activity for a few hours on Thursday, but then it got quiet. The finishing equipment companies had a lot of machinery on the floor, as did HP, Epson, and Xerox, but that was about it. The main corridors between booths were wide enough to accommodate large motorhomes, and most smaller vendors seemed to spend more time talking with each other than prospects.

Still Money on the Floor

The Xerox and Standard-Horizon booths were front and center and both drew attendees. Xerox had stories to tell, ranging from its lower-end C-series to Iridesse to the iGen5 that now sports fluorescent yellows and more. It seems that the new capabilities can be easily applied to most documents. Xerox looks to be on its way back, and I must admit I like seeing the company return as a player in commercial print. Copier and printer dealers should be paying attention to Xerox’s C-series copier/printers and the compelling eye-popping colors available on these small boxes.

A few steps further back in the hall, HP had brought in a prodigious number of presses, a tactic the company has used for some years, which gives the impression of the booth being jam-packed. It drew people in, and HP had some good stories to tell, like its remote print-engine color monitoring and reporting systems that are a new part of Print OS.

An aisle or two over, Epson had a host of affordable wide-format machines that could serve as a great product line or capability extension for copier/printer dealers. These machines could be sold into small businesses or corporations alike and add new value for any dealer looking for business and profits beyond letter-size pages and toner.

On the software side, I chatted with Rochester Software Associates (RSA). Possessing a couple of decades of software experience, RSA brings expertise in creating, printing, and producing a wide range of documents commonly needed in companies, schools, and many organizations already served by copier/printer dealers. The point-and-shoot, platform-agnostic nature of their software automates a variety of tasks and simplifies printing. Truth be told, I wrote a couple of case studies and shot some video for RSA 10 to 12 years ago and had minimal contact since then. All I can say is the company has raised the bar over the years. It costs nothing to look, and some copier/printer dealers have found RSA’s offerings can add value for them and their customers alike.

PRINT 19 was both bittersweet and informative. If you went looking for how the players could offer solutions to real challenges, you could find some answers. Yet, even with its ultra-compact size, it could be disappointing if you didn’t know what you were looking for. Still, that’s no different than at far larger shows. Even drupa can seem like an elaborate excuse to sell beer and sausages if you don’t know what you hope to learn and accomplish.

Don’t feel bad if you missed the last dance at McCormick Place. As I noted, many—myself included—have predicted its demise for some time. As any regular attendee and supporter of PRINT will admit, its demise diminishes our industry, but it hopefully clears the way for a new type of show that is more than vendor companies showing up in hopes a sale will occur.