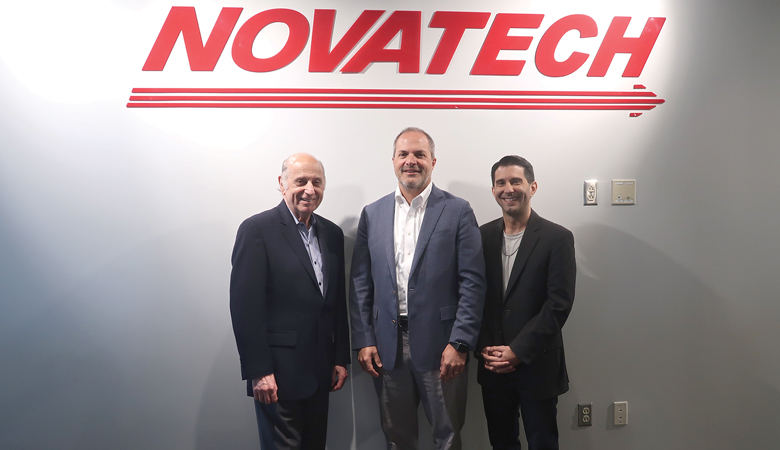 Cooper weighs in on his mission, recruiting, positioning Novatech for success, the impact of private equity, and what’s next.

Top (From left to right): Frank Cannata, Dan Cooper, and CJ Cannata; above: Novatech’s NSight device monitors and secures the network, reports on toner levels, automates documentation and keeps a real time inventory of everything on the network.

In June, our Dealer Tour brought us to Novatech in Nashville, Tennessee. Dan Cooper, who joined the company as CEO on  April 12, 2019, graciously welcomed us. As a 30-year industry veteran, we believe Cooper is well equipped to lead the day-to-day business that highlights his keen ability as a managed IT and print services provider. It is Cooper’s charge to continue the company’s expansion and oversee its succession plan that has been underway for nearly two years. He replaced Novatech’s founder, Darren Metz, who now serves as executive chairman.

Looking at the big picture, Cooper’s challenge is to take an entrepreneurial dealership and transform it into a management company, something he had accomplished at Xerox’s Global Imaging Systems’ (GIS) subsidiary Electronic Systems (ESI), which he joined in 1999 and was appointed president in 2000.

Five years later, Cooper was promoted to the headquarters of GIS, where he was responsible for overseeing the operation of companies across the U.S. He left GIS as president in August 2018. Before joining ESI, he spent ten years with Danka Industries as a regional general manager.

We know Dan’s reputation well enough to understand that he is a talented executive with the ability to execute the inevitable changes that must be made.

Novatech began in 1999 as NovaCopy, a Panasonic dealer. One of its initial big wins was First Tennessee Bank, which had operations in Chattanooga, Memphis, and Knoxville. That contract was responsible for providing NovaCopy with MIF in every county in the state.

Shortly after that, NovaCopy added Konica Minolta to its business, and things started to move quickly. With the convergence of analog to digital, it was clear Metz knew what he was doing as he rode the technology wave. Case in point, NovaCopy was one of the first dealerships to use GPS for dispatch. In 2005, the company moved into production print.

The company’s winning culture embraced NovaCopy’s driving mantra to go get it and don’t take no for an answer. NovaCopy refused to lose.

In 2018, NovaCopy changed its name to Novatech to better reflect, as Founder Darren Metz noted in a press release, “who we are, who we are becoming, and the solutions and services we provide.”

Above: Novatech is among a select group of dealer who have remained committed to – and are succeeding in – 3D Print

During our visit, we spoke with Cooper, as well as Joe White, president; Dave Moorman, president, managed IT Services; and John Sutton, director of sales. To keep things simple and to make this interview more readable, we have taken their comments collectively and attributed them to the CEO.

CR: What was your early assessment of Novatech?

Cooper: Darren Metz was in the software business. He likes to tell you he failed a lot when he did not. He tried software as a service, which is where it is today. However, he was ahead of the market. That said, for Darren, technology and connectivity came easy to him. That facilitated the transition into the managed services area.

CR: With low unemployment in our industry, what is your view on recruiting?

Cooper: We need to hire both experienced and inexperienced people. We need to develop tenure and commitment to the industry. We also need new talent that we can grow, and groom people to have a career in this industry.

CR: How do you find this talent?

Cooper: We use college fairs and show potential hires we are a safe place to have a career. This is particularly true for those who want to leave the high-tech areas of New York or California. The three major hubs of the company are Nashville, Dallas, and Atlanta. All are growing. The key is we are in winning environments.

CR: Novatech was an early adopter of 3D technology. Based on our conversations with the previous management, the company did well. What is your view of 3D printing?

Cooper: We learned what not to do and are currently having discussions with manufacturing folks about other services—MFPs and production print products. Because of 3D, we have a lot of unique customers to approach. In 3D, you must give up a bit of margin. We are competing with software engineering companies who are selling CAD. This company chose to stick with it while others dropped out of it quickly.

CR: What is your view about the products and services you must sell to be successful?

CR: You mentioned production print. What percentage does that represent to the business today, and can you provide the breakdown for the other areas in your business?

Cooper: We have five areas where we break out the business:

CR: How would you like the company to be identified and how do you get there?

Cooper: First, we want to be identified as a managed office [services] provider. This includes computer/networking, including security, as we start walking into the building. We realize everything we sell breaks, and we need to be known as a company that uses predictive analytics to get ahead of any problems. This includes the server or the router. You must be able to do well with both A3 and A4 MFPs. We are creating some of the problems in the way we sell to the customer, particularly when we sell them high-speed machines they do not need. We should be looking to optimize their environment, but also look at what is going on with their security and their desktops. But, you first must deal with printing. HP sold the devices as unmanaged. We want to bring them all together. People talk about response time. It should be immediate and proactive.

CR: How do you accomplish that?

Cooper: We are doing what I call A3/A4 time of sale. [Remove] everything that prints and figure out how you can accomplish the print function most efficiently. To do that, you have to discover the top five jobs. Once you know that, it becomes easy to optimize. To do that, you have to spend time with accounts and get as efficient as possible with the install. We need to be aware that we are fighting for all the pages and part of being able to do that is understanding what the customer is doing. One message I would like to get across to our sales team is that we are all looking for net new business. They must become aware that the next new business can be in the accounts we are already selling and servicing.

CR: How do you charge for scans?

Cooper: That is a necessary part of the business. As we begin to wrap software around the device, where you make money is managing the software. Most dealers have a software company to do that. We need to make money on the scanning and software they are using. If there are problems in printing, scanning, or connectivity, we must change the service agreement to compensate for the time we are on the phone. In some cases, we try to sell them independent scanners.

CR: What is your vision going forward?

Cooper: Thinking about the device today as an endpoint. In the modern office, the MFP finds more and more use. It is not the copier that is going away, it is the server. It is more about helping the client augment their internal IT or becoming their provider, and in either case, becoming their trusted advisor.

CR: The big question in the industry today is what are the private equity companies seeing in our industry that makes it so attractive?

Cooper: People do not trust the public markets. They would rather put their money into private equity companies with multiple revenue streams. I don’t believe they have a view that the industry is going to shrivel up and go away. The management of these private equity firms is shareholders in the company. They cannot make money unless their acquisitions perform. As a rule, they own about 30 different types of companies. They own a broad spectrum of the industry and not just imaging companies. They don’t look upon our industry as a copier distribution organization but rather as a technology company that in their view is only going to expand. Maybe over the next couple of years we are going to find out if the valuations were too high. But it is measured by the recurring revenue and technology stream.

Each has its strategy in terms of length of time they will own a company. It could be two years or five years. You must know that if they had a deal, they would sell the company in a minute.

CR: What’s next for Novatech?

Cooper: We must move Novatech from an entrepreneurial company to a management company, to an employee [focused] company.

CR: Thanks, Dan, and many thanks to Joe, Dave, and John as well.

Above: This modern and open kitchen and common area serves as a focal point for the layout of Novatech’s executive offices in Nashville.