As a result, the Federal Reserve may have to make some tough decisions.

The economy is inherently cyclical. And there is an epidemiological cycle associated with COVID-19. These two types of cycles are creating unusual dynamics for the economy. Economic policy, both fiscal and monetary, has reflected both cycles. August was clearly a month where COVID cases moved upward in a big way, with negative implications for consumer spending and the economy. The expiration of unemployment benefits for millions in early September will add to the drag on the economy over the rest of the year. 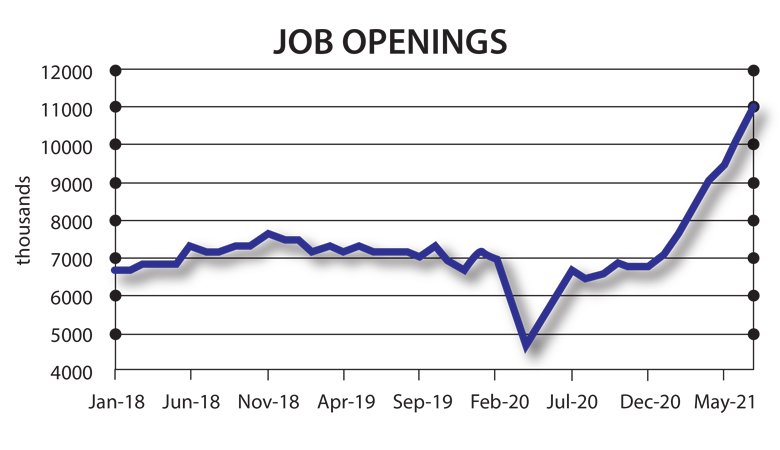 The cyclical aspects of the successive waves of COVID should not obscure the fact that it is also leaving more lasting imprints on the economy. This is especially apparent in the labor and housing markets. In the labor market, we have seen many individuals formerly active in the market drop out entirely. This has helped create an unusual situation in which employers are reporting large increases in the number of job openings that they have been unable to fill.

The data in the graph on page 24 comes from a monthly survey by the Bureau of Labor Statistics known as the Job Openings and Labor Turnover Survey (JOLTS). Typically, the number of job openings in recent years has hovered around 7 million. As of the most recent month for which results are available (July), the number of openings is up to almost 11 million.

This rise in unfilled job openings reflects a complex mix of causes. A significant number of workers have left the labor force due to increased caregiving responsibilities. In some cases, this reflects a lack of adequate childcare options. For another group of workers, COVID has led to a reassessment of career plans and a reluctance to return to old jobs. It is possible that the expiration of unemployment benefits and the start of the school year will help to reduce the labor shortages that many employers are facing. It seems unlikely, however, that the level of unfilled job openings will return to pre-pandemic levels anytime soon.

Already this mismatch between job openings and workers has resulted in faster wage inflation. In the year ending February 2020, average hourly earnings for production and other nonsupervisory workers rose by 3.2%. Since then, they have been increasing at an annualized rate of 5.6%. The longer this elevated rate of wage inflation continues, the greater the risk it starts to push up consumer prices across the entire economy and becomes embedded in inflationary expectations. Officials at the Federal Reserve have expressed the view that the uptick in inflation will be short-lived. They may be underrating the long-lasting effects of COVID on the labor market, as manifested in part in the mismatch between job openings and the availability of workers.

Housing is the other part of the economy where more long-lasting effects also seem likely. Home prices have been appreciating at an unprecedented rate, with year-over-year increases for the median price of existing homes sold topping 20% in recent months. This reflects another way in which COVID has changed the choices people make. Families with school-age children have been especially affected, as they have had to weigh how various school districts are handling various issues associated with COVID.

While there have been some indications of demand and rents firming in some major urban markets, the overall effect has been a shift in preferences toward suburban housing and school districts. Increasingly, it appears likely that this shift will be an enduring one. As with the labor market, the shifts in the housing market are creating inflationary pressures that could well be enduring.

These potentially longer-lasting inflationary pressures are sure to be topics of discussion and analysis at the Federal Reserve during the next few months. It is increasingly likely that the Federal Open Market Committee (the Fed’s policymaking arm) will announce plans to wind down its program of asset purchases during one of its next two meetings (in September or November). It has been purchasing securities (a combination of Treasuries and mortgage-backed securities) to the tune of $120 billion per month. This will very likely be gradually reduced over the course of 2022.

This is not a straightforward decision for the Fed. In early September, more than 7 million people saw an end of their unemployment benefits and another 3 million saw the termination of the supplemental $300 per week that the federal government was funding. It will take a few months for the Fed to get a clear picture of the effects of the expiration of unemployment benefits on both consumer spending and the labor market. It is true that a large amount of the fiscal stimulus provided last year, and this year has been saved by households. However, there is another group of households that is more cash-constrained and the expiration of unemployment benefits will likely have a severe effect on spending by those households.

The Fed must also weigh the effects of COVID on international supply chains. Key components affecting the production of a wide range of products from automobiles to smartphones and other consumer electronics are produced in countries experiencing COVID in their own distinct ways. The timing of the effects of new variants differs quite a bit geographically. Vaccine availability has been relatively limited in some countries, leading governments to take more restrictive measures to control the spread of the virus. As a result, supply-chain disruptions remain quite severe in many parts of the economy. It is possible that the Fed will conclude that there is not much it can do about those disruptions and that it needs to shift its focus to the inflationary forces that are building up in the labor and housing markets.