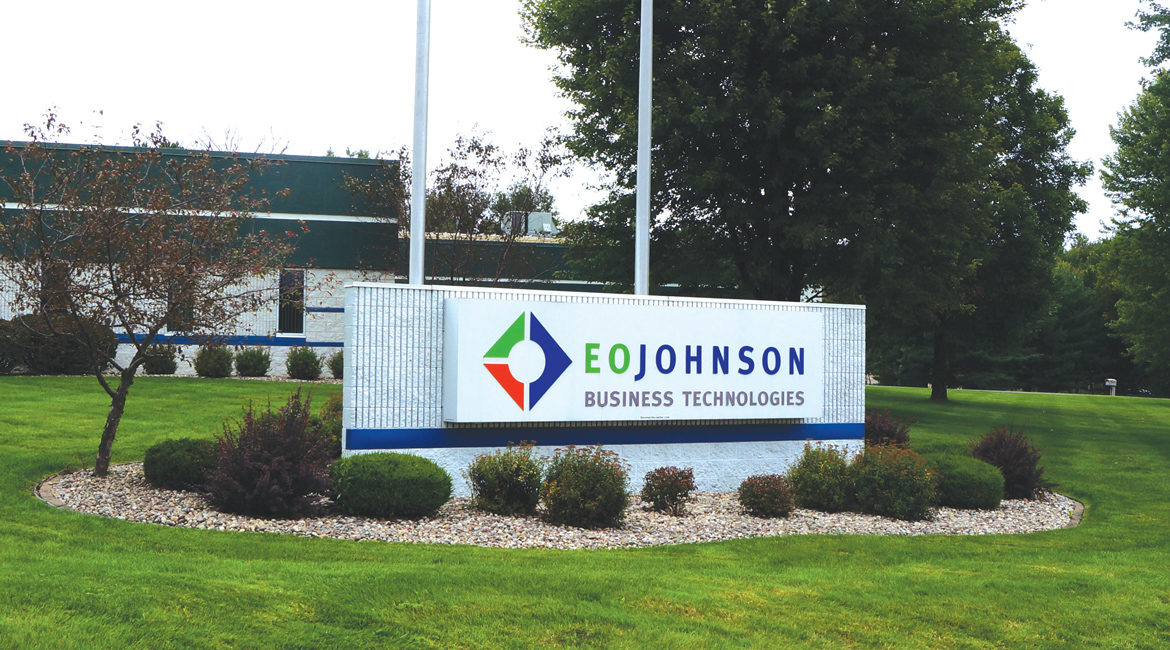 Celebrating its 60th anniversary this year, E.O. Johnson is a progressive, thought-leading organization whose success is anchored by commitment, innovation, empowerment, and trust.

Like a fine red wine, E.O. Johnson Company in Wausau, Wisconsin, just keeps getting better with age. As the company finishes celebrating its 60th year in business, there’s no indication the dealership is slowing down in any way. Rather, E.O. Johnson continues to position itself for continued success.

Two of the chief architects behind E.O. Johnson’s stellar performance over the past 30-plus years are Mary Jo Johnson, owner and chief executive officer, and Roger King, E.O. Johnson’s former president and chief operating officer, who is now retired. I have known both of these industry leaders for nearly three decades, and I am fortunate to call them friends as well. It was an honor to introduce them to CJ and include their dealership on our 2017 dealer tour.

After a pleasant dinner our first evening in Wausau, Mary Jo, Roger, CJ, and I jumped into business the following morning, spending the better part of five hours in a conference room, learning about E.O. Johnson’s corporate culture.

The E.O. Johnson Company is built on commitment, innovation, empowerment, and trust. Like many of the most successful dealerships we have visited on our tour, E.O. Johnson has a rich history and strong industry relationships. The dealership currently employs 274 people, and had revenues of more than $50 million last year. The company represents Canon, Ricoh, and Toshiba and is highly valued by each of its distribution partners.

Mary Jo has always had a strong work ethic. As a girl, Mary Jo worked part-time to save money for things she had an eye on, such as a bicycle. After she graduated college from Lawrence University, Mary Jo took a job in the insurance business in Texas. At 23 years old, she was gainfully employed and was looking to buy a house. However, she learned a hard lesson that was all too common at the time. Her loan application was rejected for two reasons: She was too young and a single woman.

Never deterred, Mary Jo kept working, gaining experience and building the foundation of her own career. In the mid-1980s, Emery O. (E.O.) Johnson, her father, called to ask her opinion on the best way to set up on a sales organization that was built around telephone solicitation. Mary Jo shared her advice, along with a couple of suggestions on how to structure the job description. Impressed with her response, Johnson asked her to come home to Wisconsin and execute on the plan.

Flattered by her father’s acknowledgement, Mary Jo became a full-time employee at her father’s dealership in 1985.

“The ongoing changes were exciting with the transitioning of coated to plain paper, the introduction of fax and analog to digital,” said Mary Jo. “We had to change to a consultative approach.”

When Mary Jo joined E.O. Johnson, she became fast friends with Roger King, who had joined the company in 1975 after graduating from University of Wisconsin, Eau Claire. Over the years, they have become so close that they could easily be mistaken for brother and sister. Together, they have earned an impeccable reputation for honesty and integrity, and they established a company culture that emphasizes operating the business as if it were a large family. Leading by example, it is obvious that both Mary Jo and Roger genuinely care for the wellbeing of E.O. Johnson’s employees and have fostered an atmosphere of trust that transcends what many others would consider good business principles.

In 1999, Mary Jo became CEO of the company and firmly established herself as a successful, pioneering female dealer with an enviable record in her own right. She has continued to foster a highly successful business environment with a very strong and positive business culture. Today, Mary Jo is quick to give credit to the many tenured and highly competent and proficient sales, marketing, and technical employees at E.O. Johnson.

“We are humble but proud,” Mary Jo explained. “We treat people as we would want to be treated.”

“We meet and exceed expectations by building trust,” said Roger. “You build trust first, and the sell comes second.”

These values are exemplified in the way Mary Jo interacts with the company’s employees and works closely with the management team. Her management style relies on a team approach, appreciating the value of her tenured employees and their experiences.

“Employees are a big responsibility and I want to be there for them,” said Mary Jo, who strongly believes the company should remain independently owned and operated. “I love this business. We have good people and I love them.”

During our visit, we watched Mary Jo follow up with an employee on an issue they were working to resolve. From Mary Jo’s interaction with this employee, we saw firsthand how she encourages employees to own a customer’s problem and how the company stands behind the decisions of its employees.

“We want our employees to make decisions, rather than going up a chain of management to get an answer,” said Mary Jo. “It goes without saying though that we do not give them carte blanche, but we expect them to make good decisions.” This, I believe, could be defined as a combination of empowerment and accountability.

Building on her father’s success, Mary Jo and Roger have led this company to excel in many areas. E.O. Johnson’s operates from seven offices in six markets in Wisconsin, Minnesota, and Iowa. Given the company’s footprint that is geographically large but relatively small in terms of population when compared to larger markets, it is a testament to the company’s hard work and commitment that it brings in more than $50 million per year in revenue.

Some of this success can be attributed to E.O. Johnson’s diversified business approach that includes managed IT, MPS, and software. E.O. Johnson is also in production print as one of Canon’s most successful dealerships with the Arizona series, having placed 15. We estimate this figure alone represents over $2 million in hardware with supply sales that are very close to that amount each year. The company has been so successful in this area that E.O. Johnson is building a separate production print facility in Eau Claire to be more efficient and productive.

In 2012, E.O. Johnson acquired software company Locknet, a $4 million company with 32 employees. In the subsequent five years, Locknet has tripled its revenue and 22 of the original employees at the time of acquisition are still with the company. However, E.O. Johnson readily admits its highest employee turnover is within its IT services group, an issue most dealers are coping with.

• Operating from seven offices in six markets in Minnesota, Wisconsin, and Iowa

• 27% of revenue in IT, including solutions and document management

• 15% of revenue in production print