With more people working from home in 2020 than ever before and more organizations planning on reducing office space going forward, and subsequently the need for A3, the market opportunities for A4 devices are stronger than ever. That’s not to say that A3’s reign is over because these devices remain critical for many organizations. However, A4 is expected to be a formidable competitor to A3 in a more downsized, virtual business world. A4 is an ideal technology for MPS, and the aftermarket for A4 can be quite profitable. 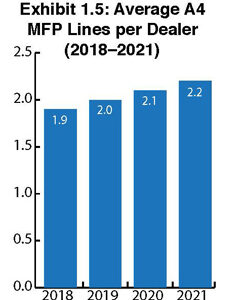 Despite the positive outlook for A4, the average number of A4 lines carried per dealer (Exhibit 1.5) has only seen modest increases since 2015, the year we first began tracking this segment—between 1.9 and 2.1. This year, that figure expanded to 2.2. Twelve A4 brands were identified by dealers in our Survey, including OKI Data, which exited the A4 market in March 2020. Last year, we also witnessed the introduction of Toshiba’s first internally developed A4 device. It’s too soon to tell if that introduction will have a huge impact on the Toshiba dealers, many of whom have been selling Brother, HP, and Lexmark A4 machines thanks to Toshiba partnerships with those suppliers. Each of those three brands is still prominent in Toshiba dealer’s A4 offerings in this Survey. 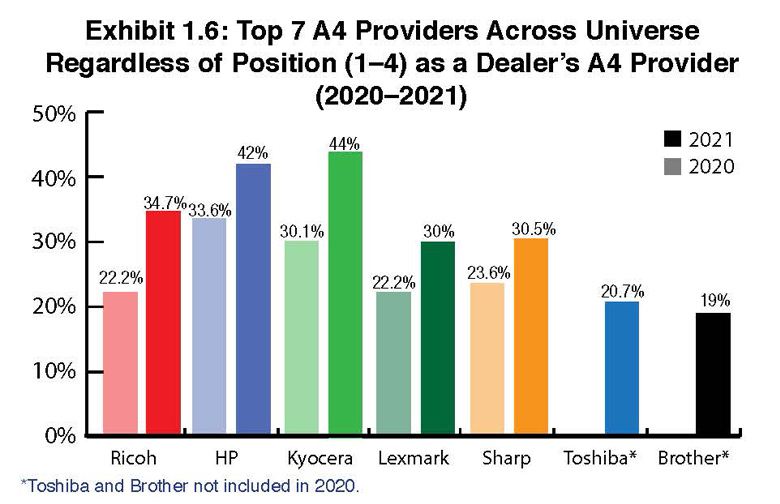 Three years ago, we first identified the Top Five A4 brands regardless of whether they were a Big Six manufacturer or a secondary manufacturer and regardless of position as a dealer’s A4 provider. Last year, we upped that to the Top Seven A4 brands (Exhibit 1.6). This category has been fluid with the positions changing each year since. This year, Kyocera recaptured the top spot with a healthy 44% of dealers carrying that line, followed by last year’s top A4 provider HP (42%). Most of the remaining positions were determined by the number of dealers from that manufacturer participating in the Survey, with the next five spots held by Ricoh (34.7%), Sharp (30.5%), Lexmark (30%), Toshiba (20.7%), and Brother (18.95%). Canon and Konica Minolta dropped out of the top seven, which is understandable based on the number of Canon and Konica Minolta dealers participating in the Survey. Lexmark and Brother had strong showings in this category, and we believe that Brother is a player to watch in A4.

We still believe it’s too soon to tell if Epson will be a factor in the A4 space, but the company continues to gain traction, with 7% of dealers carrying that line, up from 6% last year. An interesting observation is that of the 19 dealers selling Epson A4s, seven are Sharp dealers. And two dealers among the 19 identified Epson as their No.1 A4 brand. That could be a sign that dealers are becoming more accepting of inkjet and Epson’s heat-free technology.

The percentage of dealers selecting their primary A3 manufacturer as an A4 manufacturer (Exhibit 1.7) found Kyocera dealers once again leading the pack with 94%, up from 92% last year. Sharp was a close second at 93%, driven most likely by the large numbers of Sharp dealers participating in the Survey. Canon and Ricoh also had strong showings here at 89% and 88.5%, respectively. 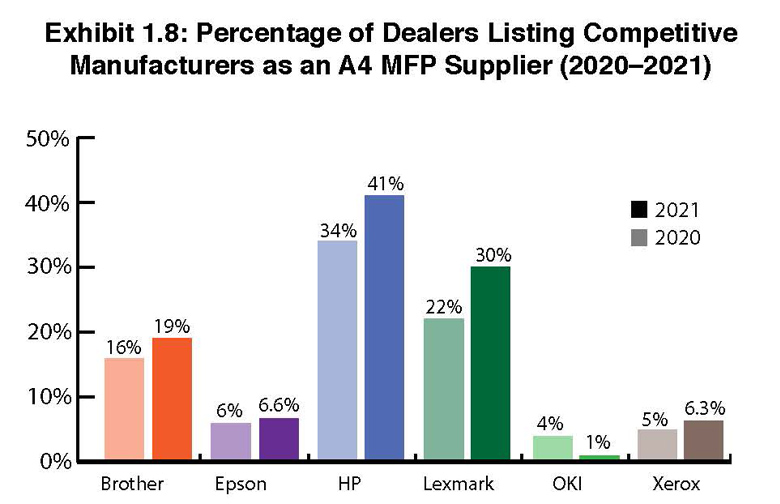 Exhibit 1.8 highlights A4 suppliers not among the Big Six, some of which offer A3 products as well. HP has grown from 34% in last year’s Survey to 41% this year. Please note that this percentage has been adjusted from the percentage shown in Exhibit 1.6, since we are not factoring in the three HP dealers who sell HP A4. Again, the two companies that we believe require special attention in this category are Brother and Epson. Brother has seen its presence in the channel grow rapidly over the past three years, from 11% in 2019 to 19% this year. Xerox has been up and down, from 8% in 2019, to 5% in 2020, to 6% this year. For the most part, dealers that carry Xerox A4 tend to be dealers with revenues under $10 million. And let’s not forget OKI, at least for now, because this could be the final year it appears on our Survey. Last year, 4% of dealers were selling the brand, and this year that percentage fell to 1%. Now that the company has exited the market, dealers are probably selling off excess inventory and will likely be finding another brand to take its place. Our money is on Brother and Epson. 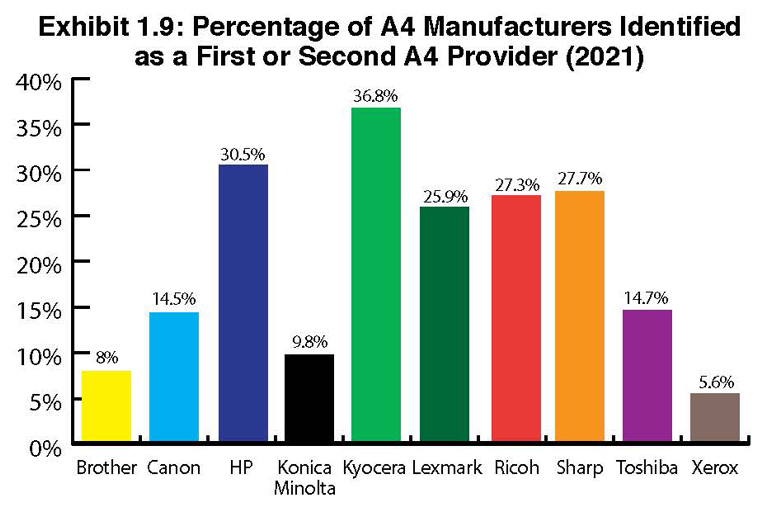 Exhibit 1.9 reveals the manufacturers that dealers identified as their first and second A4 line. We feel that this information should be of interest because it contrasts with a dealer’s primary provider, typically its A3 provider. Kyocera has the most dealers selecting it as a secondary supplier with 36.8%, a 7% increase from last year, followed by HP (30.5%), Sharp (27.7%), Ricoh (27.3%), and Lexmark (25.9%). The percentages for Sharp and Ricoh illustrate the strength in numbers of Survey dealer participants representing these two OEMs. Once again, we are including Brother, as 8% of dealers placed it in a No. 1 or No. 2 position as an A4 supplier. Although Brother is not on a par with HP and Lexmark, we view this as further evidence of the traction Brother is making in the channel.

A3 MFP LINES PER DEALER