A3 MFP LINES PER DEALER

In this year’s Survey, 729 A3 MFP lines were reported across respondents from the Big Six dealer universe, comprising dealers representing Canon, Konica Minolta, Kyocera, Ricoh, Sharp, and Toshiba. If we were to factor in the seven dealers who reported representing HP and Xerox, that number would rise to 745. The average number of lines per dealer for the Big Six universe is 1.9. 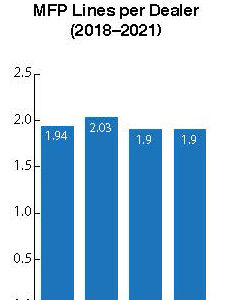 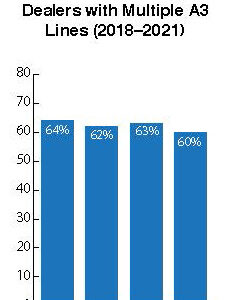 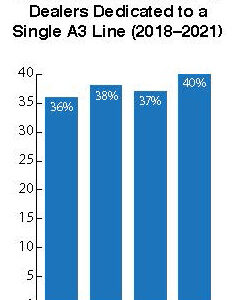 The average number of lines per dealer has been holding relatively steady the past four years (Exhibit 1.1). In 2017, the average was slightly lower at 1.82. There has been an increase of smaller dealers participating in the Survey over the past few years, and should this trend continue, we expect the average percentage to remain essentially where it is today. Supporting that observation is the increase in the number of dedicated dealers from 2020 to 2021 participating in the Survey. Fully 40% of dealers in this year’s Survey were dedicated to a single A3 line, up 3% from last year (Exhibit 1.3).

Any disruption in the A3 universe is likely to come from HP. The company continues to gain traction in the A3 space as it looks to expand its presence in the independent dealer channel. This year, 18% of the Big Six dealers identified HP as a secondary A3 supplier, down from 20% in 2020. This drop is likely due to a larger Survey response and a higher percentage of single-line dealers participating this year.