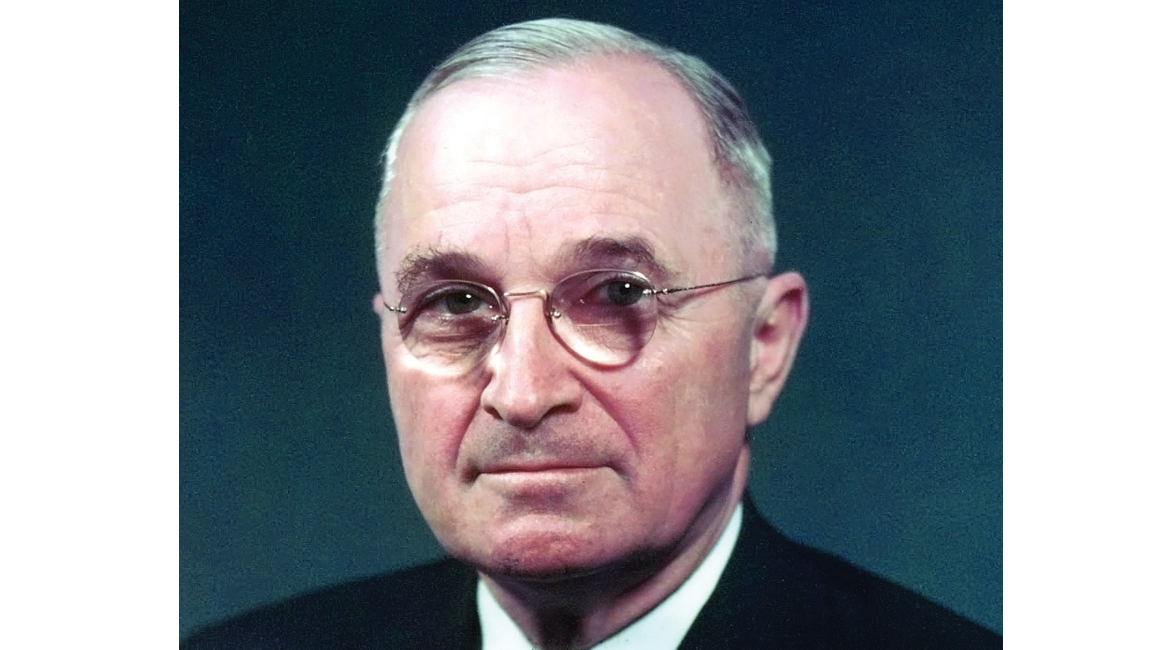 The buck always stopped at our 33rd president.

This is another article on U.S. presidents who served in the military. My main source for this piece is David McCullough’s definitive work Truman. All 992 pages of that book tell a great American story. If you enjoy reading American history, you should thoroughly enjoy reading about Harry S. Truman.

Colorful is too bland of a description for a plain-spoken man. He had a sign on his desk that said: “The Buck Stops Here.”

Washington, Jackson, and Grant were all generals, and Teddy Roosevelt was a colonel of his beloved Rough Riders. Truman was an army artillery captain in World War I. For all these men, serving in the military was a turning point in their respective careers.

You might say that things started going Truman’s way when Woodrow Wilson called for a declaration of war on April 12, 1917, before a joint session of Congress. Truman had turned 33 in the spring of 1917 and was two years beyond the age of serving under the new Selective Service Act. He had left the National Guard six years prior.

The Selective Service Act of 1917 was not going to stop Truman from entering the fray. He was determined to serve even though he was legally blind in his left eye. His mother said that he passed the eye test because he memorized the chart. Truman expected to be given the rank of sergeant because of his prior service. However, like in the Civil War, the men in the unit he was to serve voted on the officers whom they wanted to lead them. Truman was elected first lieutenant of the 2nd Missouri Field Artillery that became the 129th Field Artillery of the 60th Brigade attached to the 35th Division. You might say this was the first election in which he was declared a winner.

After completing his training in artillery school, he was given command of Battery D of the 2nd Battalion, 129th Field Artillery.  A battery is comprised of 4 guns and approximately 200 men.

He sailed to Brest, France, on March 29, 1918, with 7,000 troops aboard the USS George Washington, a confiscated German luxury liner. The American Expeditionary Force (AEF) consisted of one million men. They spent close to 8 months of hard fighting and Truman always acknowledged that they were fortunate to be in the artillery as the infantry were the ones that took most of the casualties.

Truman returned to Missouri and married his sweetheart Bess Wallace. When he left for France, he was very much a man of the 19th Century. As an example, he strongly disapproved of women smoking and drinking, even of men taking a drink when women were present.

The post-World War I era became the Jazz Age, and women were flappers who wore a lot of makeup, short dresses, and short hairstyles. Music, sports, and literature all featured a more liberated society, which was the antithesis of the 19th-century lifestyle.

His attitude towards women did not change but he seemed to be more tolerant of the ongoing changes in societal values. In all the reading I have done about Truman, what comes through is that he was a well self-educated man. He loved to read, and his knowledge of American history was considerable. Well-read people do more than educate themselves. They learn from what others have done and conclude that they can accept new ways of thinking and doing things.

The war also gave Truman courage, amply demonstrated throughout his entire political career. Truman’s experience in the war gave him stature in his community as the men he led admired him greatly. He served in a National Guard, which meant the people who were members of his battery came from nearby his home.

Truman owed his life in politics to one man, Jim Prendergast whom he met during his military service.  He was the nephew of Tom Prendergast, considered “the political boss” of Kansas City and Jackson County, Missouri, from the post-WWI period until 1939.

After Truman failed at a clothing business in 1922, Prendergast suggested he run for a judgeship in eastern Jackson County, an administrative position that did not entail serving in a legal capacity. Thanks to the Prendergast organization, Truman was elected. In 1934, he was elected to another county-wide position.

Prendergast persuaded his uncle to support Truman for the U. S. Senate Democratic nomination. Truman won in a close primary battle and went on to win in the general election. Despite winning the election, Truman had to endure people calling him “The Senator from Prendergast.”

After Prendergast was convicted of income tax evasion, attempts were made to unseat Truman in the 1940 U.S. Senate election. Truman was re-elected. In his second term as Senator, with World War II underway, he began to build a national reputation as a military spending reformer. The Senate Committee to investigate war-profiteering was referred to as the Truman Committee. The committee’s efforts were responsible for exposing corrupt practices by various manufacturers holding war contracts. If ever there was an opportunity when a politician could line his own pockets, it was being selected to be Chairman of this war profiteering probe.

On January 26, 1945, Prendergast died after a long illness. Truman, now the newly elected vice president shocked many when he attended the Prendergast funeral. He was the only elected official who attended. Truman brushed aside the criticism, saying simply, “He was always my friend and I have always been his.”

If you want to sum up this man’s character, you can describe him as a person who was honest, humble and had integrity. That is not something you can say, in general, about politicians of any era. The fact that Merle Miller chose to write a book about Truman and entitle it Plain Speaking says it all.

After stepping down as president in 1953, he could not afford a new home befitting a president of the United States, so he settled in Independence, Missouri, at his wife’s family home.

Every president since Grant wrote their memoirs upon retiring from public office and earned a handsome reward. Truman said he was not going to write his. The writers lined up and said they would do it for him and, of course, extract a very substantial payment. He respectfully declined. Shortly after that, he announced his biography would be written by his daughter Margaret Truman.

It was obvious that he had no estate to leave her, and the money she received as an author was considerable. He wanted her to be the beneficiary of the great demand for his life story.

Three things stand out, at least in my mind, that are representative of Truman’s legacy. At the end of World War II, Europe was starving and in desperate need of assistance. Secretary of State George C. Marshall recommended an enormous relief program to help feed millions. The legislation was passed, and the Senate wanted to name the bill, “The Truman Plan.” Truman expressed his gratitude and declined. He asked that they refer to it as “The Marshall Plan.”

During the run-up to the general election of 1948, Dwight Eisenhower had retired from the military and was president of Columbia University. Truman contacted him and asked if he would visit him in Washington. Eisenhower accepted the invitation. Truman asked for Eisenhower’s help in getting the Republican-controlled Senate to approve the NATO treaty. The Senate Majority Leader was Robert Taft, an avowed isolationist. Together they were able to get it done.

On March 12, 1947, President Truman appeared before a joint session of Congress to ask for U.S. assistance for Greece and Turkey to forestall communist domination of the two nations. The British government had conveyed to the U.S. Government it could no longer provide economic and military support to Greece and Turkey who were threatened with a communist takeover.

Historians have cited this address, which came to be known as the Truman Doctrine, as the official declaration of the Cold War.

Truman’s address outlined the broad parameters of U.S. Cold War foreign policy: the Soviet Union was the center of all communist activity and movements throughout the world; communism could attack through outside invasion or internal subversion, and the United States needed to provide military and economic assistance to protect nations from communist aggression.

Eisenhower embraced the Truman Doctrine when he became president in 1953. Kennedy, Johnson, Nixon, Carter, and Reagan all did the same. Together they broke the backs of the Soviet Union by carrying on what Truman had established. It is worth noting that the Truman Doctrine was enacted by a Republican-controlled Congress and Reagan finished the job with the Democrats in the majority.

I end this piece by quoting Mary McGrory from an obituary she wrote in The Washington Star the day after Truman was buried.

“He was not a hero or a magician or a chess player, or an obsession. He was a certifiable member of the human race, direct, fallible, and unexpectedly wise when it counted.”

David McCullough’s Truman and Plain Speaking by Merle Miller are the primary sources for this article. Also, our library holds books that I have read in which Harry S. Truman is either the main subject or his achievements are included in a book about another individual.

The Accidental President: Harry S. Truman and the Four Months That Changed the World by A.J. Baime

The Conquerors: Roosevelt, Truman and the Destruction of Hitler’s Germany, 1941-1945 by Michael Beschloss

When the Buck Stops with You: Harry S. Truman on Leadership by Alan Axelrod

Truman and MacArthur: Policy, Politics, and the Hunger for Honor and Renown by Michael D. Perlman

The Truman Doctrine and the Origins of McCarthyism by Richard M. Freeland

Harry and Ike: The Partnership That Remade the Postwar World by Steve Neal

Hard Copy: Production Print is Not for Everyone