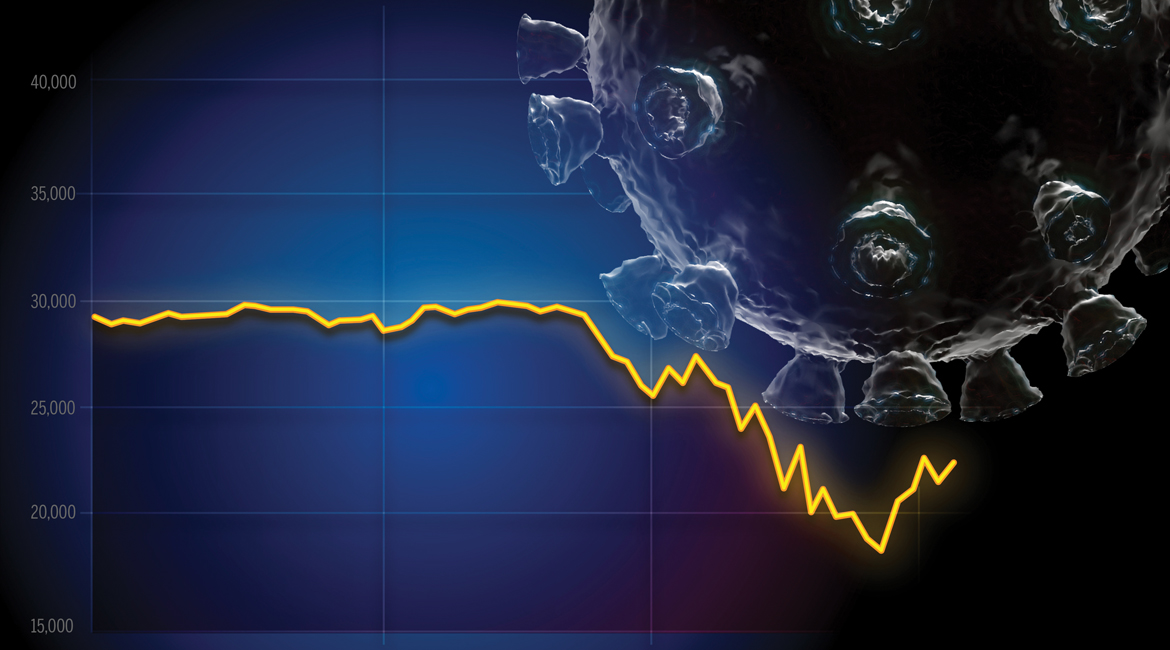 Economic Matters: What’s Next for the Economy?

The economic data reveals that the various safety net and stimulus measures adopted are working to cushion some of the losses in income and employment suffered during the COVID-19 pandemic. However, this has not persuaded consumers to spend as they usually do. The uncertainty and fear experienced by consumers and businesses has depressed activity. Some of this uncertainty and fear has to do with economic concerns. But some of it also reflects fears about safety and health during a pandemic that has already killed more than 100,000 in the United States and 400,000 worldwide, a toll that could well double by the end of the year.

Data reported by the U.S. Department of Commerce shows that personal income rose almost $2 trillion (on an annualized basis) in April or 10.5%. Real disposable income (which adjusts for taxes and inflation) was up an even stronger 13.4%. Yet, consumer spending was down 13.2%. Therein lies a problem. This data illustrates the fact that a generous safety net can only go so far in mitigating the damage done to the economy by COVID-19.

Wages and salaries dropped by almost $800 billion on an annualized basis in April. However, this was more than offset by a $3 trillion increase (annualized) in government social benefits. The increase in government benefits include the stimulus checks and expanded and more generous unemployment benefits. Americans saved most of it, with the savings rate rising to 33.0%. The savings rate stood at 8.2% in February.

This enormous increase in savings can be attributed to a few factors. The first is government restrictions that shut down a variety of businesses, from restaurants to barbershops, which has obviously curtailed some of the usual spending by consumers. As states relax those restrictions, there should be increases in spending. However, other factors may continue to powerfully restrain spending, even as more sectors of the economy are reopened. One is economic uncertainty. The stimulus checks are a one-time event, and it remains to be seen if a second round will be enacted. In addition, the $600-per-week supplement to unemployment benefits will expire sometime in July. The funds provided through various loans to businesses will also eventually be tapped out. It is a reasonable concern on the part of many people that these stimulus and safety net measures will become less generous in the months ahead—which induces precautionary savings.

On top of fear and uncertainty about the economic future, there is fear and uncertainty about whether it is safe to resume many activities. It is too early to estimate the magnitudes of these three factors—closures of businesses, fear of the economic future, fear for physical well-being—affecting consumer spending. The data will reveal the impact of these factors in the months ahead. Maintaining personal well-being may be the most important of the three, and its emphasis will remain in force until a vaccine or much better treatments for COVID-19 are developed.

The current recession is different from prior recessions in that it is caused by a force that is entirely external to the economy. However, there are policy measures (greatly expanded testing and tracing for example) that could potentially reduce this fear.

With respect to fear and anxiety about the economic future, policymakers have a variety of options at their disposal. One is to simply extend various benefits such as more stimulus checks and more unemployment benefits. Another option is to put policy on a form of autopilot and explicitly link the size of additional benefits to macroeconomic variables such as the unemployment rate. This could potentially reduce some of the uncertainty about the future by explicitly linking the generosity of the safety net to the amount of economic distress.

Some Good News and Next Steps

Not all the economic news has been bleak. There was some good news in the form of an unexpectedly strong May employment report. It showed non-farm payrolls rising 2,509,000 and the unemployment rate falling to 13.3% from 14.7%. The rise in non-farm payrolls partially reversed declines totaling more than 22 million in March and April.

The job gains seen in May were in the private sector. Public sector jobs dropped by 585,000 in May, following declines totaling almost 1 million in March and April. This highlights one of the biggest risks to the economy in the months ahead. State and local governments are suffering from a fiscal crisis, mostly due to sharp declines in revenues. Absent significant additional federal assistance, they will have to continue to lay off large numbers of employees, as well as make devastating cuts to budgets.

It seems likely that additional fiscal stimulus, including aid to state and local governments, will be forthcoming. Both political parties have a vested interest in nurturing the recovery ahead of the November elections. Even with additional stimulus, however, it will likely take years for the economy to fully recover.

This reflects the fact that many small and mid-sized companies were struggling even before the pandemic. In some cases, small retail establishments had been engaged in a long and losing war of attrition against retail giants. The pandemic simply accelerated this culling process.

For many restaurants, some sort of reckoning will have to be made about whether survival is possible in a world of social distancing and reduced seating capacity. Traditional brick-and-mortar retail establishments will have to weigh how much longer they can afford to wait for customers to return.  Similar considerations apply to the travel and hospitality sectors, and many other parts of the economy.

Uncertainty is never good for business. Unfortunately, the uncertainty from the COVID-19 pandemic will continue to weigh heavily across the globe for the foreseeable future. Businesses will put off investments. Households will delay making major purchases. Educational institutions will have to devise elaborate contingency plans for this fall. Some of this uncertainty can be reduced by a robust program of testing. Some universities have indicated that frequent testing of students and staff will be part of their plan for reopening. Sports leagues are taking a similar approach.

In the absence of a clear federal plan, much of this is happening on an ad hoc basis. This is not necessarily a bad thing. Individual businesses can tailor their approach to local conditions and take advantage of their familiarity with their own needs. The same could be said of local governments. It remains to be seen if this sort of grassroots approach will succeed without the kind of funding and financial incentives that only the federal government can provide. Large financial incentives are likely needed to persuade labs to make the kind of investments needed to greatly increase testing capacity and bring down the costs of tests.

FDR famously said in 1933 that there was nothing to fear but fear itself. There was undoubtedly a psychological dimension to the Great Depression and there is a psychological dimension to the current situation. But in the same speech FDR correctly noted that, “Only a foolish optimist can deny the stark realities of the moment.” This, too, needs to be kept in mind in assessing the path ahead. It would be a mistake to think of the current economic crisis as a self-resolving one. A lack of appropriate additional steps could well result in the economy stalling toward the end of this year.

Managed It: from Services to Outcomes