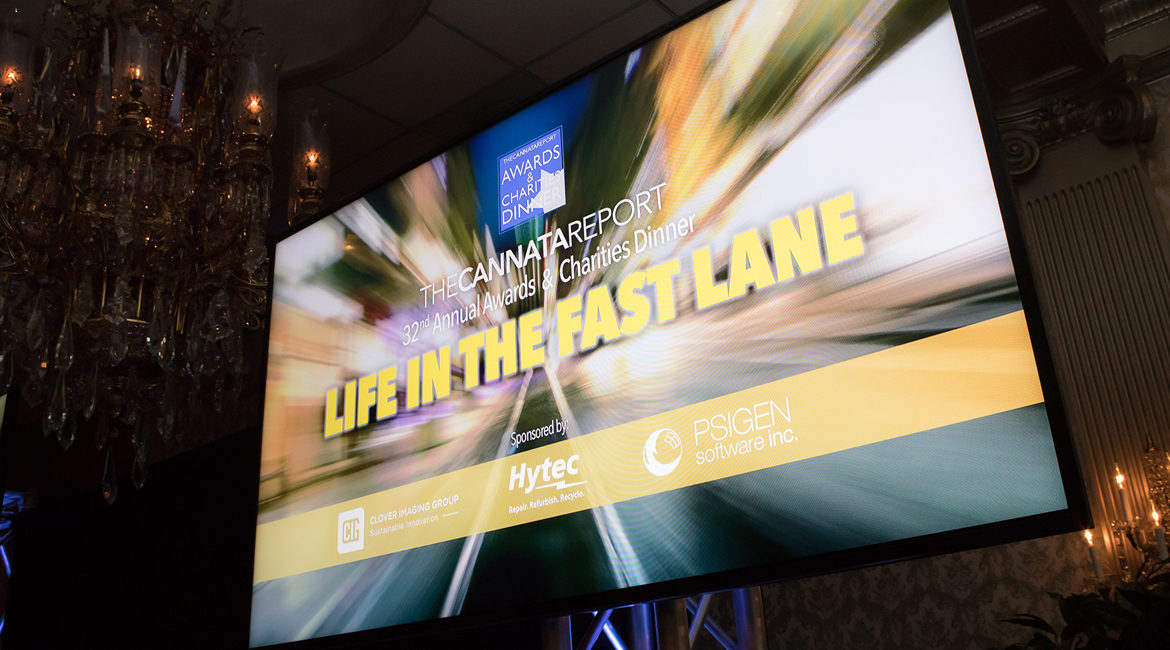 It was a landmark year for The Cannata Report’s Annual Awards & Charities Dinner with $188,000 raised. A total of $177,000 benefits the John Theurer Cancer Center at Hackensack University Medical Center (HackensackUMC), while $11,000 benefits Adopt-a-Soldier Platoon and Camp4Heroes, a North Carolina camp for wounded and recovering veterans. To date, the annual event has raised $2.2 million for numerous charities nationwide, including over $500,000 total to benefit HackensackUMC alone.

Over 260 guests, including senior executive representatives from nearly 75 top companies across the industry’s dealer, manufacturer, leasing, software, IT, and aftermarket segments, attended this year’s event. Thanks to them, we substantially surpassed our $2 million fundraising milestone mark.

Two Frank Award recipients also achieved milestones. Laura Blackmer, recently appointed senior vice president of dealer sales at Konica Minolta and former SVP of sales at Sharp, won her third consecutive Frank Award for Best Female Executive. She is the only executive to win this award since its introduction in 2015.

Ticking off another milestone was Rick Taylor, president and CEO, Konica Minolta, who won Best Male Executive for a record 11th time. Konica Minolta also became the only company to score a hat-trick at the Cannata Dinner, winning awards across three categories. These included Best Marketing Strategy and the new Best Production Print award, which emphasizes the critical growth areas in imaging upstream.

Also of considerable note, Toshiba won the 2017 Best A3 MFP Manufacturer Frank Award. As Toshiba was an underdog in the race for this highly coveted award, the manufacturer’s win was the surprise victory of the evening. Other award winners of the evening included ACDI for Best Software and Services Provider, GreatAmerica Financial Services for Best Leasing Company, Lexmark for Best A4 MFP Manufacturer, and Toshiba for Best-tin-Class. In total, The Cannata Report bestowed nine Frank Awards in 2017, all determined by the results of our Annual Dealer Survey. We respectfully offer sincere  congratulations to each of these 2017 award winners.

The Cannata Report also presented a special lifetime achievement Frank Award to surprise our dear friend and emcee extraordinaire of the Cannata Dinner for the past three years, Robert C. Goldberg, general council of the BTA. It was our privilege to present Bob with an award, inscribed “the dealer’s attorney and best friend.”

For the second consecutive year, New York Giant Super Bowl XLII Champion Antonio Pierce made a special appearance in support of our efforts to raise funds for HackensackUMC, serving as both keynote speaker and auctioneer. He also very graciously donated his own personal tickets to the November 19, 2017, New York Giants/ Kansas City Chiefs game, complete with VIP passes, which he auctioned off to the highest bidder, Paul Gigante of Gigante Vaz and Partners. Chris Polek of Polek and Polek, Frank Mallozzi of EFI, and Rick Taylor each placed other winning bids for Giants memorabilia.

With the support of Clover Imaging Group (CIG) and Hytec, which returned this year as official sponsors, and PSIGEN, our new partner for 2017, we were able to donate all proceeds from the event to our charities. Our deep gratitude goes to Luke Goldberg, executive vice presient of global sales and marketing, Clover; Eric Auman, president and CEO, Hytec; and Glenn Johnson, president, PSIGEN.

We are also indebted to Sharp and Barry Geller, who produced the multimedia awards ceremony, and MWA Intelligence and Mike Stramaglio for ensuring everyone truly enjoyed the after-party.

…Clover, Hytec, and PSIGEN for ]their official event sponsorship;

…Sharp, with special thanks to Barry Geller for event A/V support;

…MWA for sponsoring our official after-party;

…EverBank for its Annual Dealer Survey sponsorship and for providing hotel guests with transportation to the Jillian Fund gala the evening prior;

…U.S. Bank for officially supporting all of The Cannata Report’s Veteran’s initiatives;

Canon U.S.A. Recognized by Forbes as One of...