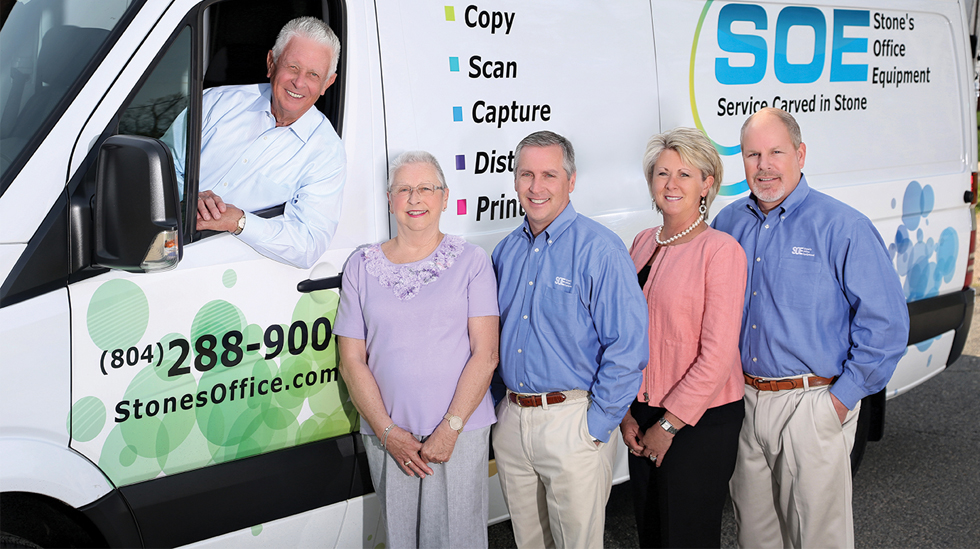 There’s an old saying, “You can pick your friends, but you can’t pick your family.” But, working side by side with family members day in and out isn’t a problem at Stone’s Office Equipment, a family-owned dealership in Richmond, Virginia. If it were, Sam Stone, the company’s president, would not be so confident at the helm of Stone’s team.

For the past 14 years, Stone has been leading the company founded by his father Frank in 1970. Working along side him are his mother, Sally, who works three days a week; sister Tina Berry, who runs the business office; and brother in-law, Mike Berry, who heads up the service department . Backing up the family is a team of loyal employees, with an average tenure of 15 years.

When I spoke to Stone in the middle of March, he told me 2016 is off to an excellent start for the company.

“We’re seeing growth,” Stone said. “It’s climbing back up from where it was in ’08 and ’09. We’re keeping our heads down and staying focused.”

While still in high school, Stone began working in the family business during his summers before becoming a full-time employee in the service department in 1982.

“Then, I moved into sales and found sales to be easier because it’s just meeting people and talking,” he recalled. “From that point on, I knew that’s what I wanted to do.”

He still remembers the first product he ever sold””an Adler Royal desktop calculator. And the second””an IBM WheelWriter typewriter.

“We’d tell customers which machines they’d have to buy in order for us to service them,” said Stone. “Then they started telling us, “˜We’re not buying from somebody else in order for you to service it. You sell [it].'”

Stone’s first line of typewriters came from Silver Reed, and the company soon won the contract for typewriters for the State of Virginia. Stone’s would eventually become the largest Silver Reed dealer in the country. From there, the company picked up the Adler-Royal line of calculators, and then, IBM (which later became Lexmark) typewriters.

“Once we became an IBM dealer, that put us on the board as far as sales,” said Stone. “From there, we started selling fax machines.”

By the late 1980’s, witnessing the emergence of personal computers and a declining interest in typewriters, Stone’s was at a crossroads. Should they take on computers, which were fast becoming a commodity, or copiers?

“We had a strategic planning meeting and decided that copiers required more service than computers,” stated Stone.

In the early 1990s, Stone’s started selling and servicing Panasonic copiers. And the company’s copier business took off, despite the challenges of selling what was a limited line at the time.

“Panasonic only had three models, and we had to find customers who needed something in those three speed ranges,” said Stone.

Still, Stone’s was able to make that limited product line work for the company until 2000, when Stone’s picked up Sharp. Even then, they remained loyal to Panasonic right up until the day Panasonic exited the copier business. Eventually, Stone’s added the Savin line, but after the IKON acquisition, things got messy, and Stone’s decided it wasn’t worth the headaches.

“The Richmond market is small compared to a lot of other markets, and Richmond proper is only about one million people,” explained Stone. “At the time, there were seven dealers representing [the Ricoh family of products””Ricoh/Savin/Gestetner], and it was a bloodbath every time we walked in the door. Our reps were getting hammered so we looked for something else.”

That something else was Lexmark, which was an astute move, considering Stone’s history with IBM and its need for a strong A4 line to complement its MPS offering. Then, three years ago, Stone’s became a Xerox dealer as the manufacturer started courting the independent dealer channel.

Stone wasn’t even thinking about Xerox, but another dealer in Virginia suggested he look at the OEM’s program.

“It gave us a national footprint,” said Stone.

Adding Xerox enabled Stone’s to sell to customers with offices scattered across the country. That was a welcome change compared to the difficulties of working with Stone’s other copier vendors on national accounts.

“Now it’s an 800 number and if we need to ship our machines to Wisconsin, we call them and they say it’s done,” said Stone.

Sharp remains Stone’s main line, while Xerox represents about 30% of its copier/MFP sales.

By coincidence, Stone’s represents three  companies that have been at the top of the document imaging news cycle of late. Does it concern Stone?

“I can’t control that stuff,” he responded. “I hear what’s happening and I think, we went through it with Panasonic and what we realize is there’s a lid for every pot .”

One thing Stone has learned over the years is that there’s security in selling multiple lines. When manufacturers ask him to become a single-line dealer, he has a ready response.

“The only way I’d become a single-line dealer is if you bought the business from me, because I don’t want to be put in that situation,” said Stone. “We were single line with Panasonic for a long time.”

In the 1990’s, Stone’s was one of the top 20 Panasonic dealers in the nation and among a group of dealers Panasonic invited to visit the company in Japan. It turned out to be a life changing, or more accurately, a business changing event.

“We went over there and saw they had a great analog box, but everybody was starting to go digital,” said Stone. “When we asked them about digital, they [Panasonic] didn’t have anything to show us. I came back thinking what a great trip it was and what a great time I had, but I have to pick up another line.”

Taking Care of the SMB Business

Stone’s customers are mostly local  businesses but also include a handful of Fortune 500 accounts. The company’s success in the SMB space is a point of pride for Stone.

“That’s what always amazes me about our numbers,” he said. “We’re a Sharp Hyakuman Kai Dealer and we maybe have two major accounts. The rest is down-the-street business. It’s humbling and a testament to the people who work in our company and take care of the customer””making sure we’re doing it right and they’re coming back to us and buying again.”

Ultimately, customers turn to Stone’s because of its people.

That longevity, however, is not so common at some of the direct branches Stone’s goes up against.

“I was talking to someone at [one of the manufacturer’s] branches here and they go through people like crazy,” observed Stone. “Another local branch went through 27 sales reps last year. To me, that’s just crazy. They’re chewing them up and spitting them out.”

Besides  working together, the close-knit Stone family vacations together. It’s usually Sam Stone, his sister, his brother-in-law, their kids, Stone’s kids, and his mother and father.

At the same time, the Stones try to avoid talking business after hours.

Given the constant family time ““ be it on the shores of Lake Gaston, NC  or in the office ““ it may be surprising that the family gets along so well.

“We had a customer who is a PhD and wanted to analyze us to find out what it was like to work in a family business,” said Stone. “He was surprised we weren’t having any quarrels. We know our roles, and we do them.”

He’d like to get back to playing golf, however, he’s still nursing a torn rotator cuff from a couple of years ago. Regardless, he’s almost ready to tee off again.

When asked about what he likes best about his job, Stone cited the people.

“I like interacting with our customers and their employees, and I still enjoy going to manufacturer meetings,” said Stone.

Asked about the least favorite part of his job, he mentions the games people play with pricing that make the industry look bad.

While Stone’s may be a small dealership, Stone believes there are still opportunities for growth even after 46 years in the business. He would like to see it grow by another million dollars a year from the nearly $5 million in revenues it makes now.

Two segments of the business doing well for Stone’s are solutions sales and MPS.

“We focus on it,” replied Stone. “People respect what you inspect.”

Stone’s has an MPS specialist. When she was hired, Stone said he told her, “[MPS] is fluid, but we’re going to build this from the ground up  and make it different from everybody else.”

Stretching the concept of an independent dealer, Stone’s flexed its independence by not doing MPS the way the manufacturers say to do it or the way suppliers like LMI or Clover recommend doing it.

“We asked ourselves “˜What can we do in our company and what does a customer want?'” said Stone.

After deciding exactly what Stone’s could do and what the company couldn’t””because its ERP wouldn’t allow them to or it was logistically impossible””Stone’s created its own MPS program.

The Stone’s approach is not one of rip and replace. Rather, the company assesses the situation to see what makes sense and what doesn’t.

“We look at their volumes,” said Stone. “Instead of taking a replacement mode, we take a management role and then figure it out””what volumes are they doing, which machines are the best””all the things you’re supposed to be doing. Then, we look at what machines can we move to other areas or get rid of because they don’t make sense in the field. After that, we narrow it down to specific models so we’re not all over the radar .”

Stone’s also provides MPS customers with their own personalized web page, which ties directly into the devices they have at their location.

“The customer loves it because they don’t have to remember anything,” said Stone. “They just go in and say, here’s the equipment I need the toner for, and we do everything else. We made it unique and something different than what a lot of people were doing.”

As Stone’s looks to grow by another million dollars a year, the company is now working with Larry Coco to hire additional sales people.

“It’s a great opportunity to be in this industry and be who we are because I see so many of our competitors taking their eyes off the ball, “ said Stone. “They’re stretching themselves thin on a lot of things and forgetting what the core business is. Customers tell me this all the time.”

Looking ahead, Stone maintains a positive outlook for his company, as he strives to continue his family’s legacy in the industry.

“With the things we have in place and if we can get off the ground with some of these sales reps we’re training, I’m optimistic,” said Stone. “It’s going to be solid. At least that’s what I keep telling myself every day I wake up. “˜Today is going to be terrific.'”

The Kids Are Alright: The Young Influencers of 2016