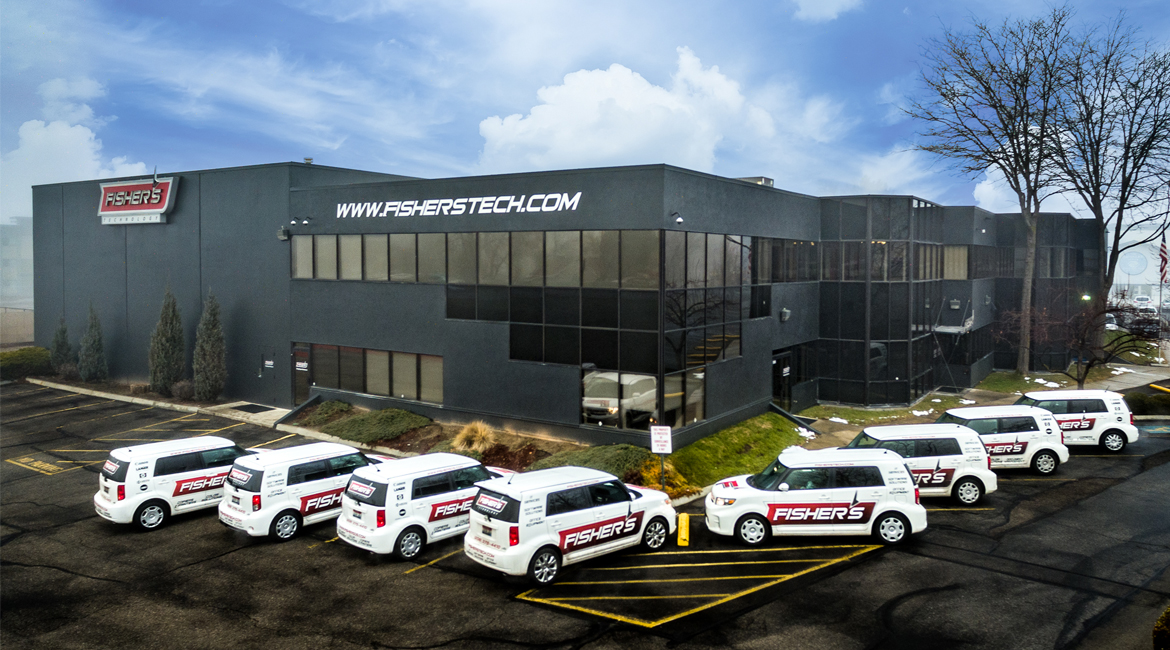 A unique culture and distinctive strategy for building an IT business differentiates Fisher’s Technology.

What began as an Underwood typewriter dealership 85 years ago is now one of the leading office technology providers in Idaho along with portions of Montana and eastern Washington. Fisher’s offerings encompass traditional imaging technology, production and industrial print, wide format, label printers, scanners, security cameras, MPS, and document management. However, those more traditional offerings are enhanced by a growing IT business. For Fisher’s, IT is the future.

Originally founded by its namesake Tom Fisher, the company established a nice niche initially selling typewriters and later office supplies. By the mid-1980s, and after a couple different owners, it was just another small office supply company serving downtown Boise. That’s about the same time owner Gary Mahn launched an initiative to grow the dealership’s office products business. Within 10 years, Fisher’s became the largest office products company in the state. In the mid-1990s, the office supplies portion of the business was acquired by Boise Cascade Office Products, now OfficeMax.

After the office products business was sold to Boise Cascade, Fisher’s continued serving the Boise marketplace as a small copier dealer offering Mita. Interested in pursuing other ventures and growing the copier business, Mahn brought in two former IKON executives to run that business while remaining principal owner. By 2005, the copier business was growing nicely, although its culture and customer experience left something to be desired.

Enter Chris Taylor, the dealership’s current president and CEO, who was originally hired as a consultant in January 2006 to help turn the company around. Prior to Fisher’s, Taylor held a variety of professions, including chemical engineer, manager, consultant for two high-profile consulting firms, and manager of strategy and planning for Micron Technology, a semiconductor company. During this professional journey, Taylor acquired an MBA and set a goal for himself to start his own business or acquire one.

Taylor figured he would spend a couple of years at Fisher’s, then move on, but a funny thing happened on the way to the turnaround—he fell in love with the business. By 2012, with the turnaround in full swing, Taylor and a partner, Eric Strand, became majority owners. Strand currently serves as Fisher’s vice president of business development.

Looking to branch out into managed IT, they acquired a small two-person MSP in 2013. Since then, organically and through acquisition, Fisher’s has expanded to 11 locations in three states and from 42 to 160 employees.

A big reason for the company’s success has been its shift to a culture centered around extremely happy employees and extremely happy customers, a big departure from its previous philosophy. When Taylor acquired the company, the CEO at the time told him, “Good luck. You have 42 employees and 42 headaches.” He also told Taylor, “This would be a great business if it weren’t for the damn customers.”

“Imagine the culture you establish when you tell your team, it would be great if it weren’t for our employees and our customers,” said Taylor. Above: The lobby of Fisher’s Technology’s Boise headquarters.

Fisher’s prides itself on its unique culture. Here, employees come first and customers second, because as Taylor explained, “happy employees create happy customers.” Fisher’s culture helps set it apart from the competition, most of whom are other independent dealers. Asked why customers choose Fisher’s, Taylor says, “the answer I like to give is that we have the best, most friendly, not arrogant, truly customer-focused people who deliver a responsive and truly caring experience for our customers.”

How Fisher’s has grown its IT business is as impressive as its culture. Currently, IT represents 15% of total revenue, but as Taylor pointed out, “it consumes 75% of our effort.” The goal is 50% of total revenue. Above: What began as a typewriter dealership 85 years ago is now  high-tech dealership with a growing IT business.

To get this segment of the business off the ground and a better understanding of the IT business and what type of leader was needed to run it, Taylor temporarily placed himself in charge of that division. Understanding the personalities and quirks of the typical IT professional, he was determined to discover if a group of IT engineers could effectively work for and be motivated by a leader without a strong IT background.

“Could they respect somebody that hadn’t been in the trenches, who wasn’t technically smart, but could share a vision and motivate a team to execute on that vision, as well as have high levels of communication and engagement,” observed Taylor. “We had, by far, enough technical genius on the team. My challenge was not to add to the technical genius or interpret their opinions. It was all about facilitation. This person can’t just grab an instrument and start playing. This person needs to conduct the orchestra and get all of those unique sounds to come together to create brilliant music.”

Once he figured that out, Taylor hired what he described as a “true leader of people” rather than someone with an IT background. Taylor acknowledged that a leader with those traits and an IT background had to exist somewhere, but he didn’t have the time to track that individual down. Lucky for him, someone with the key qualifications was already working for Fisher’s. Zack White, the firm’s IT director, has an MBA and accounting background, and spent seven years selling copiers for Fisher’s. He also managed a few of the dealership’s remote locations in Montana.

Taylor had no interest in building an IT business from scratch or assuming that because the dealership had connectivity engineers on staff, they could also manage networks. He also didn’t want the company banging its heads against the wall for seven years learning a new business. The goal was to acquire a company that knew the business and then innovate on that existing business, which he did in 2013.

“I wanted to give IT the respect it was due and acquire a company that knew the business,” said Taylor. “This is a totally different business model, very synergistic, but different.”

Fisher’s strategy for growing the IT business is cross-selling to its thousands of copier customers. “That’s our true competitive advantage against MSPs,” said Taylor. “We have thousands of warm-call customers we can go after, and we have awesome sales teams and marketing engines that MSPs generally don’t have.”

Fisher’s also provides IT services to customers who have copier contracts with other dealers. Over time, many of those customers have switched to Fisher’s for their imaging technology.

Fisher’s IT services division offers an array of services, including managed IT services, network security, backup and business continuity solutions, Microsoft licensing, and unified communications. Unified communications include hosted PBX phone systems, as well as room control systems and audiovisual products. “The whole game for us in the IT space, including phones, is monthly recurring revenue (MRR),” observed Taylor. “Everything that we do as a business is to get monthly recurring revenue. Phones fit just beautifully with MRR, because the hosted phone solution, that’s pure MRR.”

Taylor describes Fisher’s IT engineers as some of the best in the business, however, finding this talent in the remote regions Fisher’s serves is a challenge. To overcome that, Fisher’s is leveraging its Smart Hands Program, where copier technicians in remote regions serve as on-site IT engineers. Much of the onsite work involves cables and reboots, tasks not that difficult for traditional copier techs. “Leveraging our copier techs to have a more extended onsite reach into our IT business is part of our strategy,” said Taylor. However, he pointed out that the dealership is reluctant to fully pursue managed IT opportunities in its more remote locations until it has a broader IT engineer base to cover those regions.

Another growing segment of the business is production and industrial print. Fisher’s primary vendors in these segments are Canon and Konica Minolta in Idaho and Washington. Fisher’s also sells the full Ricoh product line, including production devices in Montana. What’s helped the production print business grow is the print-for-pay market, even though Taylor was hesitant to call on those accounts because the owners have a reputation for being difficult.

He changed his mind after Fisher’s did some research and discovered why certain dealers were successful in production and industrial print. A common criterion among those dealers was having multiple machines with the same engine in the field and selling to print-for-pay clients. “If you don’t, you’re not going to be efficient or have multiple machines in the field,” said Taylor.

The hiring of a production specialist a few years ago has also spurred growth in that segment of the business. “It’s been game on ever since then,” said Taylor. “We love the production-print space!”

Asked if he had any words of advice to share with readers of The Cannata Report, before we concluded the interview, Taylor once again referenced the company’s culture, “I’m a neophyte in this industry, so I don’t have any business giving advice to anybody, but what’s worked well for us is focusing on employees first and the customer experience second.”

Fisher’s Technology President and CEO Chris Taylor is also the current president of the Copier Dealers Association (CDA), the dealer peer group, and is responsible for a CDA spinoff, the Managed Technology Association (MTA) which is focused on the MSP business. Taylor’s goal is to change the culture of the CDA so that it is relevant long term. “We need to be evolving our businesses,” he said. “I felt like the content [at the CDA meetings] was still pretty copier-centric.”

The MTA currently includes 17 dealers and requires separate dues. It analyzes dealers’ financial and operational data related to managed IT and compares it against other dealers to create targets so that members can see how they are doing relative to each other. While that group is currently open to CDA members only, it may expand membership to pure-play MSPs as well.

Based on his experience at Fisher’s, Taylor has strong opinions about how to build a successful managed IT business. First and foremost, he said, “top levels of leadership and ownership need to be intimately involved.” That’s important to him with the MTA.

“I want to see the owners of the copier dealers in those meetings,” Taylor said. “When I don’t, my judgment, and that’s all it is, a bias judgment, is that they’re not all in. I needed my company to see that I’m all in and that this is a major part of our future, and we’re committed to not only providing the financial resources and hiring the right people, but from an executive focus perspective, that it also has our attention all the time.”

Hard Copy | from the Editor’s Desk: Under the Influence

Beyond the Big Box

Business As Unusual: Primed for the Pandemic Part...