The MPS world experienced quite the shake-up in 2020 due to the pandemic and the subsequent increase of people working from home. We can debate all we want how much printing was actually done from employees’ homes, but we are holding firm to the notion that the amount of printing done outside the office was negligible.

Nevertheless, this employee location-shift certainly propelled HP Inc.’s Remote Work Solutions Suite and GreatAmerica Financial Services Corporation’s MPSelect print security program to center stage last year to facilitate accommodating the needs of a remote workforce. No matter how much remote workers were actually printing outside of the office, solutions such as these only served to enhance the reach of MPS. 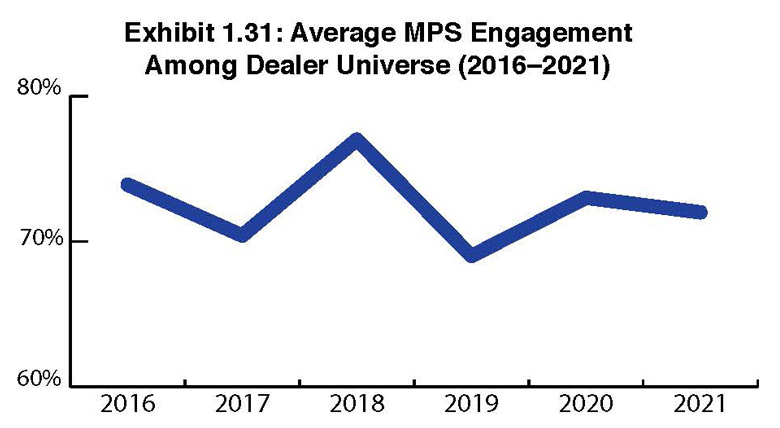 The pandemic didn’t seem to have much of an impact at all on the average percentage of dealers offering MPS as 72% (Exhibit 1.31) provide this service, compared to 73% a year ago. Over the past few years, we’ve seen this percentage fluctuate from 69% in 2019 to 77% in our 2018 Survey. We’ve been saying that dealers that offer MPS will remain in the 70% to 75% range going forward, and this year’s Survey results have not changed our mind. We also believe that solutions geared toward managing remote workers’ printing could be a factor in keeping MPS percentages at healthy levels.

Overall, the percentage of revenues for MPS and MNS reported by dealers in our Survey tends to run higher than the revenues some other organizations in our industry report. Their percentages are based on a dealer’s actual financials, unlike ours, which is based on the honor system. Unless we see something totally out of place, we use those figures or note the discrepancy.

This year, the average percentage of revenues associated with MPS is higher (14.8%) than was reported in last year’s Survey (12.6%). Contributing to this increase was Toshiba, which saw its average percentage of revenue attributed to MPS rise from 8% to 20%, and Sharp, which saw a rise from 13% to 21%. Each of those OEMs had dealers stating revenue percentages from MPS as high as 90%, which might have been accurate in this pandemic year if they weren’t earning revenue from equipment sales. Although we are reporting the percentages as they were noted in our Survey, we surmise the actual percentage of revenue for those two specific OEMs was more in line with the rest of the OEMs, in the 10% to 13% range.

As we did last year, we had three HP dealers participate in this year’s Survey, and all offer MPS. Also, three of the four Xerox dealers participating in this year’s Survey offer MPS, as did one dealer that did not claim an A3 supplier. These six organizations, excluding the dealer who did not denote a percentage, reported an average percentage of yearly revenues associated with MPS of 14.3%.