Starting in 2017, we began tracking dealers with revenues of $7.5 million or greater, calling it, the “$7.5 Million-Plus Club.” Previously, we tracked dealers with revenues of $5 million and higher, dubbing it the “$5 Million-Plus Club.” Those breakdowns made much more sense when average dealer revenues hovered around $7 to $8 million. Today, average revenues are in the $15- to $16-million range. When average revenues were $7 to $8 million, our feeling was that a dealer with revenues of $5 million and above had sufficient resources to add new products and services to grow the business, as well as expand through acquisition. By 2017, that $5 million figure no longer seemed realistic for a dealer that was interested in growing, which is why we upped that number to $7.5 million. Last year, prior to the pandemic, we decided to raise that figure to $10 million, which we believe is a more realistic figure for a dealer interested in growing their business beyond where it is today. Despite the financial impact of the pandemic on the channel, we are sticking to that figure. 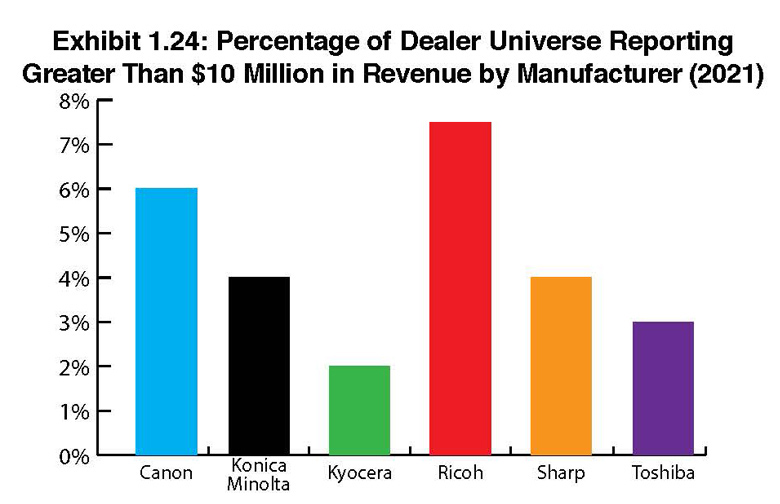 All of this is not to say that a dealer with less than $10 million in yearly revenues can’t expand or acquire, but those dealers that do would likely be exceptions. In our view, those smaller dealers with revenues under $10 million remain prime targets for acquisition. Dealers in this revenue tranche are either serving small local markets or a niche and are comfortable with their existing size or considering exiting the business. Though one may argue this is a generalization when we look at the average yearly revenues of those dealerships that have been acquired over the past five years, most of these dealerships had yearly revenues of well under $10 million. Last year, we noted that we expected the pandemic to accelerate this trend in 2021, and although not proceeding at breakneck speed, acquisitions were starting to pick up around the second quarter of the year. And yes, virtually every acquisition was of an entity with well under $10 million in yearly revenues.

Perhaps the most surprising revelation in this year’s review of the $10 Million-Plus Club is how the percentage of dealers in this not-so-exclusive club has grown in the past year. The best reason we can give for that growth is the higher number of dealers participating in our Survey. It certainly had nothing to do with dealers having banner years in terms of revenue. Exhibit 1.24 shows the percentage of our dealer universe reporting revenues greater than $10 million by manufacturer, while Exhibit 1.25 indicates the percentage and average revenue of dealers in the $10 Million-Plus Club by manufacturer. Of all respondents, 45 % (172 dealers) reported revenue of over $10 million.

Diversification has been instrumental and will continue to be critical for helping dealers grow prior to and coming out of the pandemic. Each of the Big Six companies has been diversifying their product offerings beyond traditional office print, and as you will see in the section on Greatest Growth Opportunities, dealers view some of these offerings as catalysts for future growth and inclusion in the $10 Million-Plus Club.